AA’s 12 Steps are widely criticised, but a new study proves that participation in the “Steps” and its systems increase chances of long-term sobriety by over 200%!

Alcoholics Anonymous (AA) has been helping millions of people get and stay sober since the 12 Steps, and the ‘Big Book’ were created in 1935. Despite the positive results, however, the organisation and the 12 Steps addiction treatment method have been widely criticised, especially in recent years. Some say that AA should not talk about God. Others believe that it has no scientific standing. And others believe that abstinence should not have to be ‘the only way.’

Back in 1935, the founders of AA classified alcoholism as a disease – albeit without any scientific evidence. In 1956 the American Medical Association (AMA) also classified alcoholism as a disease – this time with scientific evidence. And earlier this year, in 2014, researchers at DePaul University’s Center for Community Research in Chicago, U.S.A., found some compelling evidence that the AA programme, used in conjunction with clinical inpatient rehab, does indeed deliver desirable results for addicts.

The study found that after two years, those who were “categorically involved” were 2.8 times more likely to be abstinent from drugs and alcohol than those who were not involved.  At The Cabin Chiang Mai, we use the 12 Steps as part of our evidence-based clinical treatment programme along with Cognitive Behavioural Therapy (CBT), to an extremely high degree of success.

CBT is a modern, evidence-based psychology, which focuses mainly on the way that negative thinking affects the way we feel and behave. Conditions such as addiction create mental and emotional disturbance, and can be treated by learning strategies and techniques to think rationally and positively. And by juxtaposing 12 Step concepts with CBT concepts, we can offer an explanation of how these two methods can work together to keep addicts healthy and free from their addiction-based impulses and behaviours.

Below, you will find a chart used in our treatment programme which gives an explanation of how the 12 Steps are used with CBT to combat the chronic disease of addiction. Click to enlarge 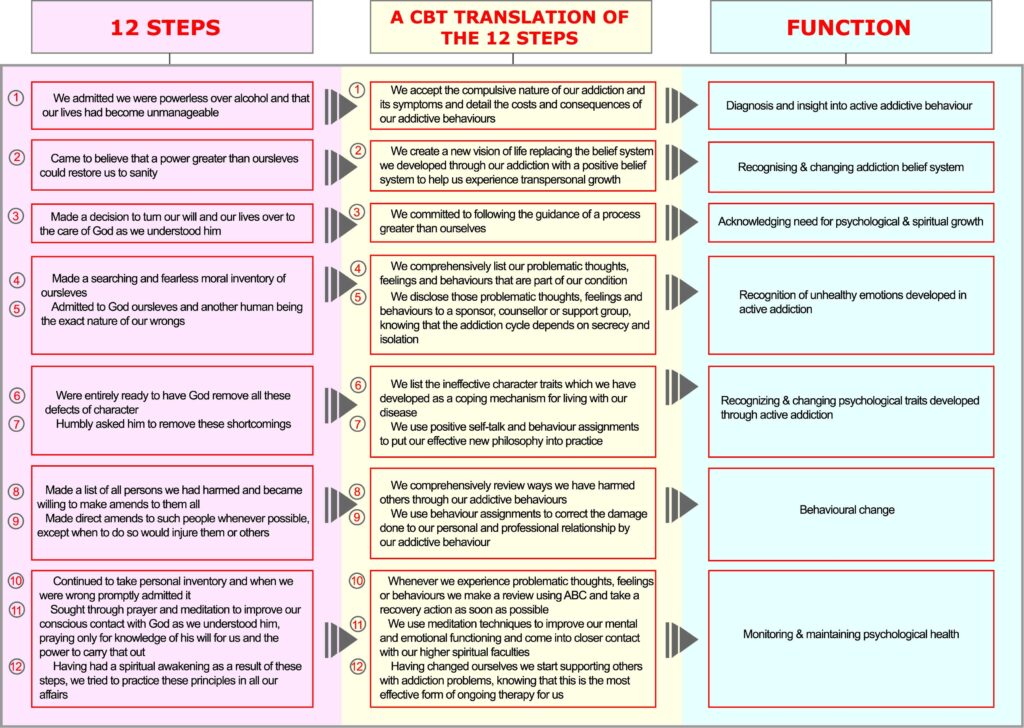 As you can see, the 12 Steps offer a psychological pathway to free an addict from the addiction compulsions that keep them unhealthy, and keep them addicted. In this way, it is easy to see a more scientific explanation of why these steps do work.

At The Cabin, we are secular in the way of religion, but it is important to understand that addiction goes beyond your own personal power. Someone with diabetes cannot be finitely cured of the disease, but through a strict diet, and medical regiment they are able to control the disease in a way that it has the least impact on their life. Such as with addiction, an addict needs to understand that addiction is a chronic disease, and that by following a certain lifestyle and regiment of meetings, outreach and constant self-work, they can keep their disease at bay.

We also incorporate the three circles method and mindfulness therapy to round out our cutting edge treatment model, which boasts a very high success rate. If you or someone you know is suffering from addiction, it is important to contact a professional for help.