Has The Australian Boozy Mum Culture Gone A Step Too Far?

Next time you’re on Facebook, hit the GIF icon and type in “boozy mums.” You’re bound to see a humorous depiction of an exhausted woman downing a massive glass of wine. Captions for pictures like this can read “My doctor told me I could only have one glass of wine a day – I can live with that.” Or they might even say, “If your kids are home, you’re not technically drinking alone.” And as funny as these may seem, the concept behind the depictions may have stepped out of bounds. 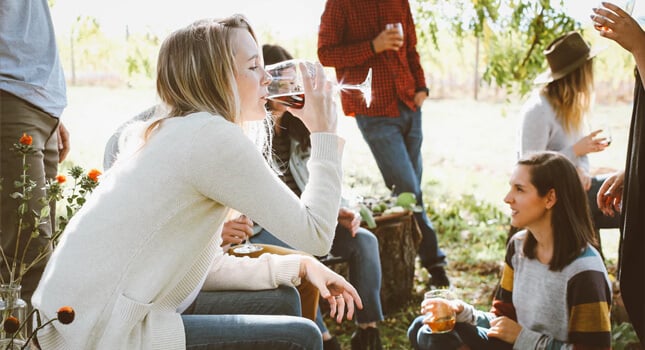 What Time Is It?

There can be little doubt that the prospect of raising children is a picture that can send shocks of fear through the hearts of many. The stress, the hectic schedule, the lack of privacy or any reasonable amount of “me” time – it’s no wonder that “wine o’clock” and “mummy juice” are phrases that have been known to go hand-in-hand with motherhood – particularly in the Australian community.

But Facebook is not alone. Instagram, Twitter, books on store shelves and movies alike tend to depict mums in a tipsy, alcohol-dependent culture that has become worryingly popular. To make it through their day, they’ll likely need a glass of wine, or more, in order to survive. It’s funny. It’s accepted. Or is it?

Concerned loved ones and addiction treatment professionals are starting to recognise a growing need for women’s alcohol rehab.

When Is Funny Not So Funny?

Most mums don’t necessarily have a drinking problem and are able to laugh at many of these depictions. But unfortunately, experts like professors and psychiatrists believe that the readiness of the public to playfully shrug off this trend minimises the dangers of excessive drinking. Have we lost sight of the serious problem presented by someone who is supposed to be caring for their children relying on alcohol to get through their day? Drinking has its risks – and they’re not funny.

Some celebrities still embrace the boozy mummy trend. The storyline is perpetuated by Hollywood. The boozy mum culture was celebrated in Bad Moms and its sequel. Gatherings referred to as “mum’s night out” involve alcohol and assorted drinking-related shenanigans. Gabrielle Union’s personal memoir is titled We’re Going to Need More Wine; Kelly Clarkson’s Instagram video series is dubbed A Minute and a Glass of Wine. The list goes on.

Most, if not all of these, mean no harm. They’re tongue-in-cheek and meant to be harmless. But do they contain more truth than humour?

You can’t even go shopping without seeing sayings like those mentioned above printed on home decor items, dish towels, pillow cases, and more. These products target mothers and are trying very hard to capitalize on this whole concept. And they are succeeding.

It is no laughing matter, however, that wine and mums in pop culture are so closely associated – particularly to those battling or who have battled addiction.

What’s in a Drink?

It’s just a glass of wine for crying out loud. Or Is It? A whole slew of health problems can result from the overconsumption of alcohol including, but not limited to: liver failure, stroke, hypertension, cancer and more. More than any decade in the past, women are drinking, and are actually now at more serious risk of the aforementioned problems than are men. What’s worse, it takes less time and less alcohol for those problems to develop in women.

Did you know that according to the United States Centres for Disease Control, the definition of moderate drinking for a woman is one glass of wine a day? Ridiculous, right? Most people have no idea. What, after all, could be wrong with unwinding after a hard, hectic, crazy day? While drinking can be social and enjoyable, in order to be truly responsible, one must drink sensibly and within recommended health parameters.

Ask Someone Who Knows

Ask the staff of any alcohol centre for women, or someone that has dealt with addiction, and you may be surprised to hear them say that problem drinking is not likely to develop in women who drink moderately. Relatively harmless are those social media images, witty remarks, and clever images referring to mum unwinding at the end of the day with a glass of wine.

If, however, you are at risk for alcohol addiction, it can be dangerous to live in this alcohol-centric culture – especially if you’re predisposed to alcoholism genetically.

The Wrong Image Is Being Portrayed

Drinking isn’t all that much amusing or glamourous, despite the fun that social media seems to have with it. For an addict who has struggled with alcohol all their life, these jokes, sayings, and images poking fun at the need for alcohol and excessive drinking just don’t make sense. Someone that has worked hard to overcome alcoholism may have a hard time understanding the glamour behind this culture. They don’t think that this kind of problem should be dressed up or joked about.

Are they right, or are they just being overly sensitive? Until you’ve been in their place, judging whether or not oversensitivity is the issue is most definitely beyond your capability. Walk a mile in a recovering alcoholic’s shoes and you’ll soon see how hurtful and damaging today’s boozy mum culture has truly become. We are not going to use real names or specific situations here, but we do want to relate the story of one mum (we’ll call her Julie) who faced the challenge of overcoming alcoholism. The good news is that she has now been sober for over three years. But when it all began, she explains, it happened in stages.

In the very beginning, after endlessly taking care of the house and kids, and struggling to reach the end of the day with some reasonable semblance of sanity still intact, it was easy to look forward to a nice, soothing drink.

Unfortunately, the “end of the day” got earlier and earlier. Pretty soon, Julie was having a beer at lunch instead of always waiting until evening. From there, it progressed to, before her family was even awake, sneaking down to the basement for a quick cocktail or two.

When she showed up in a drunken state to pick her kid up from school, and the principal had to step in, she knew she had reached the end of her rope. It wasn’t long before Julie checked herself into a treatment program as an inpatient. The episode at school and the death of a friend opened her eyes. Alcohol was something she couldn’t cope with alone.

The Scars Run Deep For Many

Some former addicts can watch other people drink without a problem. Julie, on the other hand, when she has to be around people who are drinking, feels very resentful. She feels like it is involved in everything from church functions to social events to the Internet to life in general. Alcohol is at the base of everything, and it isn’t getting any better. Much the contrary, in fact, according to Julie.

Has the Pressure Increased?

Could it be that, as opposed to years ago, more women are feeling like they are under excessive amounts of pressure? Everything is more complicated from parenting to worrying about whether or not your child is safe at school to helping with homework assignments that are beyond your comprehension.

And what about the pressures of social media? It’s not just your children that face that kind of judgment or the possibility of bullying. The outside world must be able to view your displays of domestic perfection or you are somehow lacking as a parent. So, it’s easy to lower your stress level by having a glass of wine, or two, or three, because that practice has already been accepted.

Being a Mum Isn’t Easy

If being a parent were easy, everyone would do it. And while there are many who have accepted the challenge and probably shouldn’t have, there are more good parents out there than bad. Or so we hope. Nonetheless, high levels of anxiety are frequently associated with parenthood – specifically, motherhood. So what’s a mum to do?

Everybody needs to blow off steam and relieve their feelings of stress and anxiety. It has become totally normalized to engage in binge drinking. From your days in college to after work with the boys or the gals. And as a mother, high anxiety is a very real possibility. So, it’s not a stretch imagining why, as a mum, a glass of wine, or two, or more would be socially acceptable as a stress reliever.

Thing is, you have to know where to draw the line. That’s not something that most of us ever practiced in college or even at those after work get-togethers. But you’re a parent now, so you better learn fast!

Why Does Mummy Drink?

In addition to relieving anxiety and stress, mums drink for a multitude of reasons. After speaking to recovering alcoholics, we’ve assembled this collection of reasons/excuses (though it is not limited to these):

There any number of reasons for this but the following have been the most commonly cited reasons for mums not seeking treatment for alcohol addiction:

Does Mummy Have a Drinking Problem?

This is not a question that any family member wants to ask themselves? Unfortunately, it is a question that is being asked more and more often in this day and age. So how do you know if your mum is a little too boozy? The following are some signs of alcoholism:

Have you fallen into a drinking trend that has become all too common among mums? Do you find yourself struggling to make it through a day without a couple of drinks or more? Has your dependence on alcohol started to affect your family life, your job, your marriage, and more? The Cabin in Sydney, Australia is here to help. For outpatient addiction treatment, The Cabin helps individuals deal with substance addictions of all kinds. They also can be helpful to individuals suffering from compulsive use of the Internet, an addiction to sex, gambling, and other compulsive behaviours. You can also consider residential rehab in Chiangmai, Thailand.

If you would like a confidential assessment, please do not hesitate to contact The Cabin. Our experienced professionals will be happy to assist you in getting a handle on your life once again, and putting your feet back on solid ground. Don’t wait another minute. And don’t take on something of this magnitude alone when help is at your fingertips.

What is a Rapid Detoxification?

Personality Traits That Are Common With Addiction

Circumstances that may lead to Alcohol Abuse or Addiction

Copyright © 2020 The Cabin Chiang Mai. All rights reserved.
Back to Top
Contact us today +66 52 080 720
This website uses cookies to ensure you get the best experience on our website. Accept or Read More
Privacy & Cookies Policy
Necessary Always Enabled
<strong>COVID19 safety at The Cabin.</strong> As an international company, we are taking every precaution to help maintain the low incidence rate which Thailand has experienced. <a href="https://www.thecabinchiangmai.com/covid19" target="_blank">Click here</a> to read more about our safety measures.