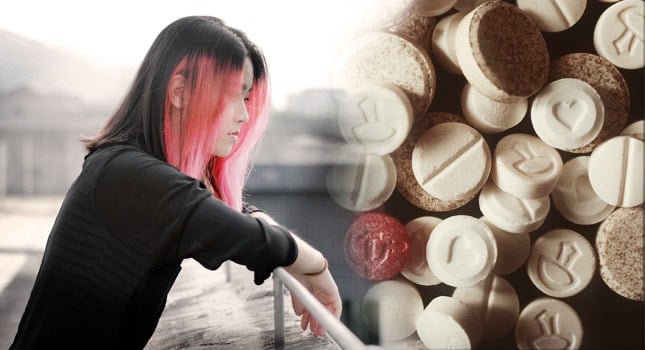 Recent research is showing that the drug ecstasy affects women differently than men. Ecstasy is a synthetic drug and acts a stimulant and a mild hallucinogen.

This drug affects the levels of serotonin; a chemical in the brain. This chemical regulates mood, cognitive functions, and sleep. Users seek out the relaxed and euphoric state, and the heightened feelings of self-acceptance and connection with others.

Ecstasy also produces negative effects like anxiety, depression, and paranoia. With prolonged use, mental functioning and memory difficulties are common.

How Does It Affect Women Differently?

As with all drugs, research is showing that ecstasy affects women differently. Women seem to be more sensitive to the effects when they use the same amount as men, the changes in perception and may also be more intense. Women have also reported having more long term effects; such as, paranoia, mood swings, anxiety, and depression.

Unfortunately more woman than men have problems with self esteem, relationships, and weight related issues. These women may be more vulnerable to Ecstasy’s short term effects, and if they like the way these affect them, than they may be at risk for developing serious health consequences and an addiction.

Research performed by scientists, have also came up with valuable theories relating to Ecstasy and how it affects a women’s mood. Ecstasy gives women a more intense euphoric high, and after they stop using in the following days, they feel a much harder comedown than a man does.

Once the feelings of euphoria and the visual hallucinations have passed, a woman will have a very low mood, and be more depressed when they come off of Ecstasy than a man who has taken the same amount of the drug. This research also has lead scientists to believe that women will have much more long term effects.

Chemicals in a Women’s Body are Affected

Scientists have recently said that women who are of child bearing age have a high risk of dying from a very serious, lethal effect of Ecstasy.

A chemical produced when Ecstasy breaks down in the user’s body produces water retention. If this water retention become too much in the body, it can be fatal. Younger women produce the female hormone known as oestrogen. This hormone causes women to be more sensitive to water retention. As a result, women who drink a large amount of water to avoid dehydrating on Ecstasy could potentially be at risk for dying from water retention.

In 1995, an 18 year old girl died after taking Ecstasy, an autopsy showed that her brain had become saturated with water.

Too much water dilutes sodium, which is crucial to normal functioning of nerve cells. When sodium is diluted, the user becomes disorientated, may experience convulsions, go into a coma, and will eventually die. The hormone Oestrogen affects the way cells respond to low levels of sodium. Women who are older are able to cope with the effects of water retention; therefore, older women are at less risk.

Women are also more at risk for going into a potentially fatal, Ecstasy related coma. However, men are more likely to die after taking the drug, but this is most likely because of an overdose or drug mixing.

Scientists have also said that every person reacts to Ecstasy differently. Things like metabolism, the body’s absorption rate, and quantity of water consumed are all factors to take into consideration. These different factors and reactions also help to explain why two people can take the same dose at the same time and only one becomes sick or dies.

It is still unclear why there are so many differences between men, women, and Ecstasy, and why women are at a greater risk when taking it. Because of the results that current research has provided, more scientists around the world are beginning to study the effects that Ecstasy has on women. Hopefully in due time, they will be able to provide a more in depth understanding to why Ecstasy effects women differently than men.