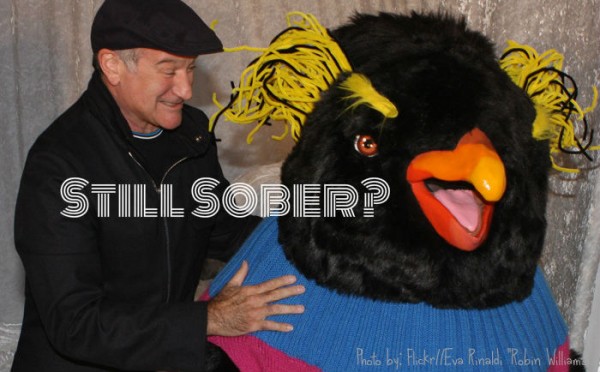 Several celebrities have checked into rehab in the past few weeks including actor Robin Williams. The difference with him, however, is that he was still sober when he did so.

62-year-old Hollywood actor, Robin Williams, checked himself into a rehab centre in Minnesota last week despite the fact that he is still sober – and still in successful recovery.

The actor was heavy into cocaine and drinking decades ago, before he quit cold turkey in 1982 when his first wife became pregnant with his son Zachary. The thought of being a father and the drug-related death of good friend and colleague John Belushi pushed him quickly into a sober lifestyle. He told People Magazine in 1988 that the death of John Belushi scared a lot of people in show business and many people pulled away from the scene. “And for me,” he said, “there was the baby coming. I knew I couldn’t be a father and live that sort of life.”

Williams stayed sober for more than 20 years before falling off the wagon in 2003, and entering a rehab facility in 2006. On set in Alaska, Williams told The Guardian how the urge to drink resurfaced. He related how he was drinking to ease his fears, but he couldn’t even pinpoint these fears, it was “Everything. It’s just a general all-round arggghhh.” It took the actor three unhappy years to finally get himself to rehab, even though he claims that those years spent drinking were not fun at all – he just couldn’t stop himself. “For that first week you lie to yourself, and tell yourself you can stop, and then your body kicks back and says, no, stop later. And then it took about three years, and finally you do stop.”

That is why Williams checked himself into an addiction treatment centre last week, and has plans to stay for several more weeks. His rep told TMZ, “After working back-to-back projects, Robin is simply taking the opportunity to fine-tune and focus on his continued commitment, of which he remains extremely proud.”

Since his relapse in 2003 seems to have been triggered by a lot of solo time on set, Williams is now ‘nipping his addiction in the bud’, so to speak – recognising his triggers and getting help with them before they take over.

Williams is not the only addict who uses inpatient rehab for recovery maintenance. Here at The Cabin, clients frequently make return visits to hone their skills at staying clean. These people  usually feel they are losing track of their sobriety and want not only a reminder of why they needed to get sober in the first place –  but also feel they need a refresher course in how to apply their coping tools to keep their sobriety.

Recognising and acknowledging triggers is one of the most important things a recovering addict needs to be able do, and asking for help is the next step. Williams told Diane Sawyer, after checking into rehab in 2006, that he spent a couple of years believing that he could fix his alcohol problem on his own. “But you can’t. That’s the bottom line,” he said. “You really think you can, then you realise, I need help, and that’s the word.”

If you or someone you know is struggling with addiction, get the help you need by contacting a professional immediately. And as for Robin Williams – we congratulate him on his long-term sobriety, and wish him nothing but success in the future. We’d also like to thank him for showing others that there’s no shame in asking for help when you need it!