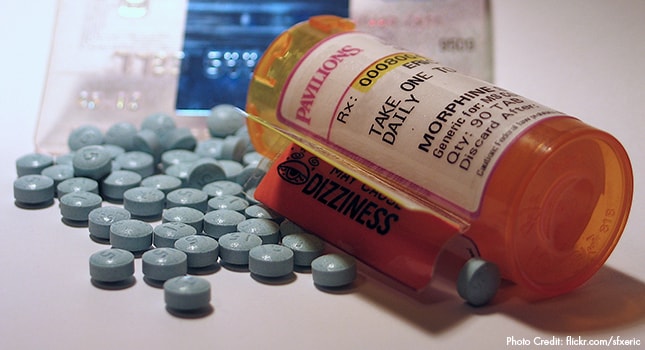 Please note: This article is only talking about opiate prescription medications. Although heroin is an opioid and is derived from the opium poppy, it will not be talked about in this article.

Opiate describes any of the narcotic opioid alkaloids found in opium. These alkaloids come from the sap of the opium poppy. Opiates are a narcotic with analgesic or pain relieving effects .The active opiates that are found in the opium poppy are morphine, codeine, thebaine, and papaverine. Oxycodone and hydrocodone are semi-synthetic opioids that are derived from morphine and thebaine.

All opiates and its derivatives are prescribed medications given by doctors. These medications are given for a variety of reasons, but they are almost always trying to help a patient ease their pain. Because opiates are given by a doctor, they are commonly misused and if this is done on a frequent basis, a user can develop an addiction.

Feelings that a person may have when taking any opiate or opioid medication may include: relief from pain, decreased appetite, euphoric feeling, and slowed breathing and heart rate.

OPIATES AND OPIOIDS INTERACT WITH THE REWARD SYSTEM

The reward system is found in the brain and it allows a person to feel pleasure. Opiate medications activate the neurotransmitters in the reward system and allow a person to feel euphoric like effects. The effect from opiates and opioids normally don’t last with repetitive use; this is known as developing a tolerance and addiction can follow easily.

There are several prescription medications that are considered to be opiates. The marketed name of the medication varies country by country. The differences in them are based upon the strength of the medication, chemical makeup, and pharmacology.

Morphine is the most common alkaloid naturally occurring in the opium poppy; it was the first medicinal plant alkaloid ever isolated. The primary use of this medication is to manage moderately severe to severe pain. Morphine is commonly given through an IV to patients who have undergone surgery.

Some common prescription names are Roxinal, MS Contin, and Morphine Sulfate. Street names for morphine are ‘M’, morph, and Miss Emma. Morphine has the second greatest risk of dependency after heroin. Morphine is most commonly injected. It can also be swallowed, smoked, or sniffed. When given through an IV, the effects are said to be very intense and the patient feels an overall sense of relaxation. It is very easy for a person to develop a tolerance to morphine, and the dosage will often need to be increased in order for the person to feel the same effects.

Codeine is found in very small amounts (1-3%) in the opium poppy. Because these amounts are so small, codeine is often synthesized from morphine. In the United States, there are no prescription medication names for codeine other than codeine.

Street names for codeine include, Cody, Captain Cody, Loads, and Schoolboy. Codeine is usually taken orally through pill form, but can be injected into the muscle. It is not given through an IV as it can cause convulsions.

Codeine is also used to treat pain, but the effects are much less intense than morphine. Addiction to codeine can occur, if the drug is misused.

Information on both of these alkaloids is sparse. However, thebaine is poisonous and is not used in medication.

However, it can be converted into other narcotics such as hydrocodone and oxycodone. Buprenorphine is also synthesised from thebaine and is used to treat opiod withdrawal. Papaverine is used for its antispasmodic effects and supplies of this drug have often run low; it is then synthetically manufactured. Papaverine can also be used to treat erectile dysfunction.

Below is only a few of the main and most common opioid medications given on a prescription basis from a doctor. To recap opioids are semi-synthetic derivatives of opiates.

Hydromorphone is synthetically produced from morphine. It is an alternative to morphine and is one of the strongest opioids available. It is used to treat severe pain or dry coughing. It is given to many patients who are terminally ill to help ease their pain. It is thought to be 8 to 10 times stronger than morphine, but has less side effects and a lower dependency rate.

Its common prescription medication names are Dilaudid and Palladone. Coomon street names are juice and dillies. Hydromorphone comes in tablet form or can be injected intravenously. The effects of hydromorphone are very similar to heroin and almost instantaneous. Hydromorphone is difficult to obtain; therefore, addiction to this drug is less common.

Oxycodone is synthetically produced from thebaine. It is used to treat moderate to severe pain. It is a commonly prescribed medication for patients after surgery. The effects are less intense than morphine.

Common prescription medication names are Percocet, Percodan, or OxyContin. Street names may be Oxy 80′s, hillbilly heroin, or percs. Oxycodone usually comes in tablet forms and is commonly combined with other drugs such as aspirin. Abusers may swallow, snort, smoke, or inject oxycodone. Developing an addiction to these medications is common, and usually leads to the user trying to obtain stronger prescription drugs.

Hydrocodone is synthetically produced from either codeine or thebaine. The medication is commonly prescribed to treat moderate to severe pain and heavy coughs. The strength of hydrocodone is significantly less than morphine. Some of the prescription medication names are known as Vicodin, Lorcet, Dolorex, Forten, and Anexsia. Street names are vikes, viko, or norco. Hydrocodone is found in over 200 medications and comes in tablet forms. Abusers may swallow, snort, smoke or inject the drug. Hydrocodone is one of the most common recreational drugs and addiction is very common.

OPIATES AND OPIOIDS ARE ADDICTIVE

As with any prescription medication, any opiate or opioid drug should only be taken under the advice of a doctor. All types of opiates and opioids are addictive; some more than others.

A Prescription can Lead to an Addiction