How Yoga can Aid Your Recovery 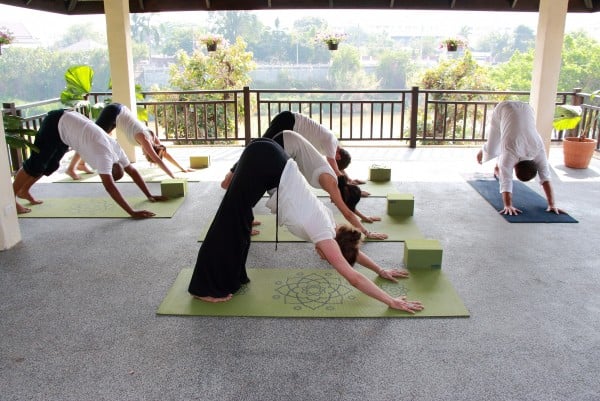 Yoga studios are as common in most cities as a café latte or a smartphone charging station. Yet, while it has evolved to suit the needs of modern urbanites, the practice of yoga is quite ancient. Moreover, in its blend of mindfulness, physicality, and relaxation, Yoga can be better at relieving modern stress and addiction than other quick fixes and shortcuts.

You’d be forgiven if you thought that Yoga was an exercise routine sprouted in some loft space in New York, London, or Los Angeles. Yoga studios are as common in most cities as a café latte or a smartphone charging station. Yet, while it has evolved to suit the needs of modern urbanites, the practice of yoga is quite ancient. Moreover, in its blend of mindfulness, physicality, and relaxation, Yoga can be better at relieving modern stress and addiction than other quick fixes and shortcuts.

As with any subject with a long history, the exact origins of Yoga are not precise. Most experts would, however, agree that it developed in the Indian subcontinent thousands of years ago. The word ‘Yoga’ itself, based in the ancient Sanskrit language, is translated variously as union, yoke, and concentration. In its philosophy, Yoga may be compared to many other spiritual or philosophical traditions. Yet while such practices focus primarily on mental beliefs, Yoga is unique in its focus not only on the mind but on the body as well.

Most yoga practices combine three elements. The first is the actual postures, which in Yogic terminology are called asana. These include any number of stretches and are performed individually or as part of a sequence. The second element of yoga is breath-work practices known as pranayama. Breathing exercises usually focus on slowing down the breathing, and can be used in combination with various postures in some forms of yoga. Finally, yoga also comprises meditation. Meditation simply means focused awareness, and in a yoga practice, this might include focusing on the breath, a spoken syllable, or another object of awareness.

The practices of physical postures, breathing, and meditation are particularly well-suited to the recovering addict. Addiction is best understood as a problem in the reward centres of the brain. The brain rewards behaviours that are not actually beneficial to the addict, such as drinking, drug use, and gambling. In order to recover, one must make the decision to abstain. Remaining focused on this goal can be challenging. By becoming grounded in the body, the breath, and the mind, one is more able to remain focused on abstinence. As a result, yoga is a great way to not only look great but also to remain sober.

Moreover, a major trigger for addiction is stress. When coping with stress, it is essential to have healthy alternatives to unwind and de-stress. Yoga helps to calm the mind and body, and those practicing yoga typically experience a sense of stillness and calm amidst the busy-ness of life.

Yoga has also been found to be an effective treatment for some forms of mental illness, including depression and anxiety. And while researchers are still conducting scientific data concerning the effectiveness of yoga as a treatment for addiction, there are more and more individual accounts of people being helped by yoga in addiction recovery.

As reported on the popular addiction site Thefix.com, Sarah, in her seventh year of sobriety, found herself becoming increasingly anxious. Her therapist recommended she take up yoga, and she found it immensely beneficial in reducing her anxiety and remaining sober.

At The Cabin Chiang Mai, we are pleased to offer Mindfulness Therapy, of which yoga is a component, as an integral part of our recovery programme. If you are seeking treatment for any addiction, please contact one of our counsellors today.

Alumni Update: For the Better