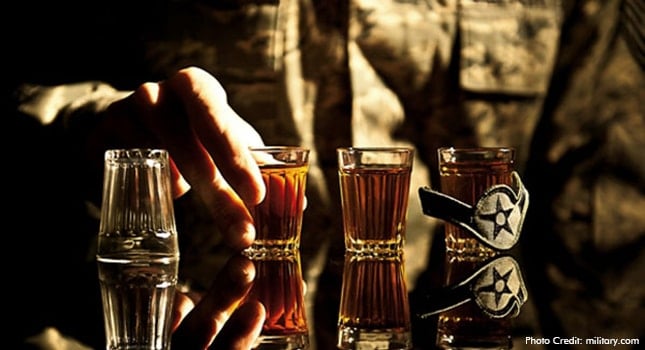 Alcohol abuse in the military has been a problem for several decades. However, the rate of soldiers who abuse it has risen significantly over the past 15 years. This heavy consumption of alcohol is a significant problem, and officials are trying to find the best way to decrease these soaring rates of abuse.

A Way of Coping

Military personnel may abuse alcohol in an attempt to cope with loneliness, boredom, stress, and the lack of recreational activities. They may choose it over other substances, because it is legal and is easily available. Alcohol in military is sometimes glamorized, and it can even be considered a kind of work culture that facilitates drinking. With this cultural influence and the parties that come along with being in the military, it becomes very easy to abuse alcohol and become an alcoholic.

Statistics of Alcohol Abuse in the Military

The active military personnel overseas in Iraq and Afghanistan abuse alcohol more than personnel elsewhere. In Iraq and Afghanistan alcohol is sold on the base and homebrew is made by the locals for purchase. Personnel are turning to it as a way of escaping emotions and other problems that they are having while in a war torn environment. Many soldiers and other personnel on base have said that drinking helps pass the time and helps them to block out their feelings.

Military doctors have to treat soldiers and civilian personnel for numerous mental and physical problems, but lack the necessary knowledge on how to deal with abuse and addiction of any substance. In the last few decades, this has become a problem for doctors working on bases overseas and bases located within the United States.

Researchers have done comparisons between military personnel and civilians. They were trying to find out if military personnel consumed more alcohol than civilians. They compared the two groups that had the same sex and age. The results showed that men of all branches in the military drank significantly more than civilian men. Women in the Marine Corps and the Navy drank significantly more than civilian women, but women in the Army and Air force showed no difference to the civilian women.

Alcohol abuse in the military cost the Department of Defense or DOD around 600 million dollars every year. In addition to that, they are spending around 132 million dollars to give the babies born with Fetal Alcohol Syndrome proper medical care.

An additional reason why alcohol abuse is such a problem in the military can be contributed to the availability of alcohol on bases and off bases. Military personnel have said that alcohol and the opportunities for drinking it were easily available in the US and overseas.

Most underage military personnel report that they never have any problems buying the product. They normally drink in bars, hotel rooms, or in their barracks, just like other personnel. Some of the countries where bases are located have lower drinking ages, this makes it very easy for underage personnel to access it when they are not on base.

Nowadays, military officials are trying to come up with various prevention strategies; such as, new policies and campaigns. They are also trying to teach personnel about the health effects of drinking alcohol and how it can affect their career.

Officials are trying to understand why the military culture itself encourages heavy alcohol consumption. In doing so, they will be able to come up with more effective strategies to try and decrease the use of alcohol. The DOD has set up a committee to try and reduce the heavy consumption of alcohol by at least 5 percent every year. Getting military personnel to stop abusing alcohol will take time, but with the right prevention strategies it can be done.