Why Australian Parents are Worried About Fortnite Addiction

Fornite has experienced such worldwide growth that it has become a cultural phenomenon. The game registers close to 40 million players from around the world every month, currently totalling 250 million. And its popularity shows no sign of slowing – the upcoming Fortnite World Cup, with its $100 million purse, promises to stir up yet another wave of excitement. 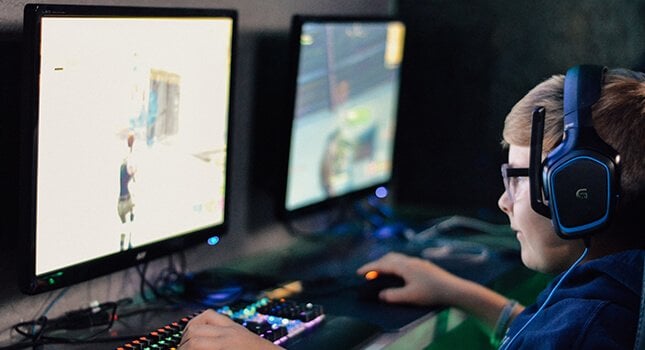 But along with its global success comes a tide of concerns among parents who are finding it increasingly impossible to tear their kids away from this game. In the midst of ever-expanding Fortnite addiction, what’s a parent to do?

Fortnite is a shooter game in which players have to find weapons and use them to kill opponents on a fantastical desert island. The Battle Royale version – the one that young players are really crazy about – was released in late 2017. This mode allows players to join up to 100 others online in a Hunger Games-style death match in which the last person standing is declared winner. Players can chat online via audio (which they usually use) or text (which is understandably less common), adding a social component to the game. All versions of Fortnite are free, but have options for in-game purchases.

A number of stories have emerged in the media recently – perhaps most notably 60 Minutes Australia’s profile of Logan Ford, a 14-year-old in the throes of a gaming addiction currently focused on Fortnite. Preferring to play Fortnite over any other activity, Ford confines himself exclusively to his room with the exception of going out for food and to use the toilet. He’s reportedly missed two years of school. And still, he says, he’d play for up to 14 hours a day if he could.

Other parents report that their kids are responding hysterically when their Fortnite privileges are taken away, being punished in school for gaming during class time, secretly waking up in the middle of the night to sneak in extra play time and even stealing their parents’ credit cards to make in-game purchases.

Eleven-year-old player Riley Holzinger says he’d have a hard time coping if his parents confiscated his game console: “I’d probably game rage, like smash stuff and then get sad,” he says. And his sentiment seems to be shared by teens across the country.

Fortnite-Related Sleep Deprivation is Taking Attention Away From the Classroom

Fortnite is seriously affecting teens’ academic performance, with many losing focus and missing homework assignments – even their social standing in school can be affected by their game stats.

Mom Debbie Vitany has been working with her teenage son Carson to get back on schedule after continually losing sleep to Fortnite game time. “We’d made some progress in getting him to cut down his Fortnite hours and get better sleep, but he’s slipped back into his old habits,” she says, adding: “I’ve never seen a game that has such control over kids’ minds.”

This behaviour isn’t unique among young Fortnite players. Says Brad Marshall of Kidspace in Sydney, “We’re seeing about 60-70 per cent of the kids coming through the door reporting that Fortnite is their primary game of use. Some kids are struggling to get to sleep, that means going to bed at two or three in the morning, for other kids it’ll be falling behind in homework, or not handing in assignments. We’ve also seen quite a lot of anger outbursts at home.”

Cam Adair of the global online gaming addiction help community Game Quitters highlights the magnitude of the issue in Australia: “When I’ve spoken at schools recently in Australia, every single hand went up when I asked whether or not they were playing it. There’s something different about this and it’s causing a lot of parents to really struggle at home,’’ Mr Adair said.

The scourge is sparking confusion among Australian parents, who are struggling to understand their children’s gaming behaviour. Some have even taken to shaming each other’s parenting approaches.

In response to the 60 Minutes special, one mom says her 11-year-old son plays Fortnite, but she strictly restricts his usage. “When he’s told he can’t have it, he gets ticked off but THAT’S MY JOB, she says. “I’m not a ‘friend’ I’m a ‘parent’. Stop getting the two confused. If my son acted like that, it wouldn’t be the cord that I’d remove, it’d be the whole machine mulched. Grow a pair.”

But a basic understanding of addiction points out that stopping this behaviour isn’t so simple. There are a number of reasons why forbidding gaming isn’t always effective.

Some parents have been on the receiving end tantrums in response to taking away their kids’ gaming privileges that was so intense they feared for their personal safety. And since kids are so digitally connected, and Fortnite is available on a variety of platforms, simply removing devices doesn’t always solve the problem.

Many kids are drawn to the social aspect of the gaming community, especially in the context of Fortnite, which allows up to 100 players at a time on the Battle Royale version. This is especially resonant with kids who have a hard time socialising in real life. According to Game Quitters, “Their online gamer friends are their real friends, and usually, their only friends. When you tell them to quit gaming, what they really hear is to stop having friends.”

Says Professir Yucel, clinical neuropsychologist at Monash University, “It’s not just a matter of time spent on a game, there are psychological aspects where someone is dependent on it, they’re not enjoying it anymore, they’re just doing it for the sake of doing it.”

How Gaming Addiction Gets Wired Into Kids’ Brains

Gaming addiction, like all addictions, has to do with the brain’s reward system, which is designed to give us feelings of pleasure in response to behaviours that are necessary to our survival by increasing our dopamine levels. But drugs, alcohol and behaviours like gambling and gaming trigger this same dopamine response – and when this happens continually, a neural pathway is formed. Gamers start to lose control over their behaviour as it becomes more of a compulsion than a conscious decision. That’s why overcoming addiction is far more complicated than simply willing yourself to stop.

Says clinical psychologist Dr Huu Kim Le of his adolescent gaming addiction clients, “They actually don’t enjoy playing anymore but feel compelled or have to compulsively play.” This leads to major developmental consequences at this crucial age: “For teenagers, because they’re spending so much time, they’re losing key developmental milestones… things like friendships, relationships, being able to control themselves.”

Addition-specialised neuropsychologist Professor Yucel of Monash University explains that video games function in much the same way that gambling technology does: “For example, you might have a small win and there’s a celebratory sound that comes through, or a small win and you can unlock an option or get a new skin.” In this way, games exploit the brain’s reward system, allowing for the easy ramping-up of the behaviour into habit.

Fortnite and Other Games are Designed to be Addictive

The maddening truth behind all this is that gaming technology is intentionally designed to be addictive. Gaming companies’ financial incentive is to keep players playing – and making in-app purchases. These companies are aware of the aforementioned dopamine feedback loop, and employ tools to exploit it – something technology author Wade L. Robinson calls “error-provocative.” That is, they use gaming technology to purposefully encourage users’ self-harmful behaviour.

Fortnite offers options within the game for players to buy battle passes, which they can use to buy special characters, costumes and weapons or earn extra rewards. Concerned professionals in the mental health community are starting to worry that this ‘freemium’ game may in fact come at a steep cost. The company that makes Fortnite, Epic Games, has been accused of using predatory gambling tactics to lure players into shelling out more than they’d like to for added features. Say Dr Daniel King and Professor Paul Delfabbro, of the University of Adelaide, “These schemes may entice some players with access to credit cards to spend more money than they can afford,” suggesting that the company might be taking advantage of young players, who tend to have less spending discretion.

The World Health Organisation describes gaming disorder as “a pattern of persistent or recurrent gaming behaviour, which may be online or offline, manifested by impaired control over gaming, increasing priority given to gaming to the extent that gaming takes precedence over other life interests and daily activities and continuation or escalation of gaming despite the occurrence of negative consequences.” These consequences of gaming addiction

All of these can significantly sway the direction of a teen’s development during this important developmental stage as the impacts on their physical and mental health extend to all aspects of their lives.

Why Fortnite is Especially Problematic

If all video games have the potential to be addictive, why is Fortnite taking the world by storm? The answer lies in its accessibility. Fortnite is free, and available on a virtually all platforms: Xbox, Playstation, Nintendo Switch, PC, Mac, iOS and Android. It also appeals to a broad age range. Its multiplayer modality provides a sense of teamwork, camaraderie and accomplishment – all appealing traits for kids who may be missing those connections in other areas of their lives.

Helping your child stop unwanted gaming behaviour has to do with steering them toward healthy habits and hobbies, and addressing the unmet needs that are causing them to withdraw into the gaming world in the first place.

The Edge has partnered with Game Quitters to offer a residential retreat programme just for gamers, which begins with a 45-day digital detox and teaches mindfulness techniques for realistic and responsible technology use.

To learn more about how we can help your son become a game quitter, talk to us today.