What are the Risks of Using Marijuana during Pregnancy?

In the second part of our addiction and pregnancy series, we take a look at the effects of prenatal marijuana use on fetal development.  Just how risky is it to smoke weed while pregnant? 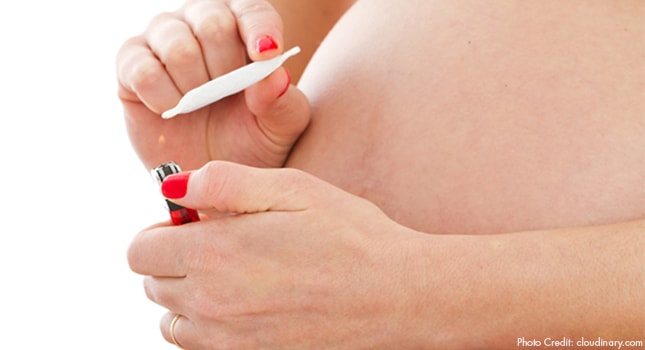 Everyone knows that drinking alcohol during pregnancy is dangerous to an unborn baby, but the effects of cannabis use during pregnancy are often unclear. Some doctors deem moderate use safe, while others are quicker to point out its dangers and negative side effects.

So the question remains:

What are the real risks of smoking marijuana while pregnant?

New research conducted at the Erasmus University Medical Center in The Netherlands has found a link between prenatal cannabis exposure and altered brain development in offspring. Children of the study who were exposed to cannabis while in the womb had a thicker prefrontal cortex – a region of the brain involved in complex cognition, decision-making, and working memory.  Says the author of the study, Dr. Hanan El Marroun:

How Common is Smoking Pot during Pregnancy?

Cannabis is the most commonly used illicit substance among pregnant women. It is estimated that 2-13% of women use marijuana during pregnancy worldwide, despite previous studies documenting both short- and long-term behavioural issues in children who were exposed to cannabis prenatally.

The Effects of Using Marijuana while Expecting

Some research has shown that THC consumed by a pregnant woman can permeate the placenta and enter a fetus’s bloodstream – this goes for both smoking and eating edibles.  Marijuana use has been linked to the following birth defects:

Up until now, not much was known about the physical changes that prenatal cannabis exposure had on the brain. The author of the recent study is optimistic that the results will offer insights into how children develop after being exposed to cannabis before birth.

And of course, if you are pregnant and addicted, the negative consequences of marijuana use then extend to your unborn child.

So, is it Okay to Smoke Weed while Pregnant?

What the Trend toward Marijuana Legalisation Means for Prenatal Cannabis Exposure

This latest study brought attention to the harmful side effects of marijuana use during pregnancy at an important time – while policies on marijuana use are changing around the globe.

“The growing legalisation, decriminalisation, and medical prescription of cannabis increases the potential risk of prenatal exposure,” says Dr. John Krystal, Editor of Biological Psychiatry, the magazine in which the recent study was published.  “This important study suggests that prenatal exposure to cannabis could have important effects on brain development.”

And as marijuana use becomes more acceptable globally, it is important to remember that despite being legal in the majority of countries around the world, alcohol has been named the most dangerous drug, with 3 million deaths linked to alcohol consumption each year. So, just because marijuana may become legal where you are that does mean that it is safe – especially when you are pregnant.

During pregnancy, it is not recommended that you use any potentially harmful substance. Drugs and alcohol can have very adverse effects on the fetus including, but not limited to, birth defects, brain damage and neonatal abstinence syndrome.

Unfortunately, quitting addictive substance use is often easier said than done. Those who are addicted to marijuana or other substances can greatly increase their chances of success with the help of professional addiction treatment.

Not being able to cease the use of a substance despite negative consequences is one of the key indicators of addiction. If you or a loved one are having trouble quitting marijuana despite being pregnant, addiction treatment is likely necessary.

Especially during pregnancy, it is incredibly important to seek an addiction treatment centre that has the experience needed to tailor the treatment programme specifically to your needs. Addiction treatment during pregnancy requires some special measures, such as emphasising a detailed relapse prevention plan postpartum. At The Cabin Chiang Mai, our counsellors have decades of combined experience treating marijuana and other substance addictions.

The sooner you seek help for substance abuse, your chances of successful recovery will be. But equally as important, the risk for adverse effects on your unborn baby will decrease exponentially. Contact us today  for a free, no-obligation, confidential assessment to see how we can help.

Is Australia’s “Ice Epidemic” Hyped out of Proportion?

Did Prince Have an Opioid Painkiller Addiction That Resulted in His Death?