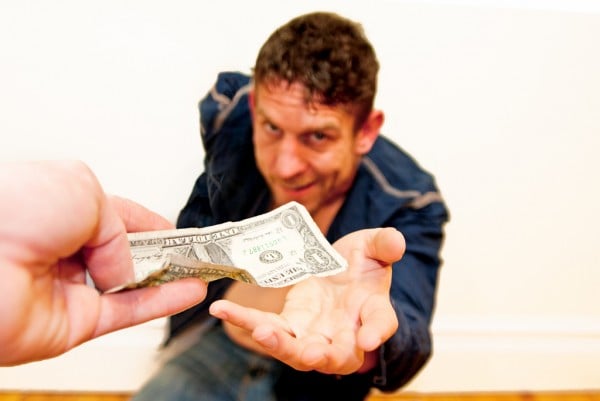 Social entrepreneur Michael Lodberg Olsen of Denmark has begun producing Illegal! Magazine and hiring known drug addicts to sell them – knowing full well that 90% of them are using their income to buy drugs.

Drug addicts, many of whom are homeless, are taking to the streets of Copenhagen to sell issues of a magazine called Illegal! – making just enough cash to cover their daily drug fix, often heroin. Aside from driving a van around the former meat packing district of Vesterbro, complete with clean syringes and an on-site nursing staff to encourage clean and safe drug use, social entrepreneur Michael Lodberg Olsen of Denmark has begun producing Illegal! Magazine and hiring known drug addicts to sell them – knowing full well that 90% of them are using their income to buy drugs.

Sellers must sign up for the programme and wear a name badge and uniform t-shirt when selling on the streets. The addicts can buy the magazine for 10 Danish Kroners (approximately $1.80 USD) and sell it for 30 Danish Kroners (approximately $5.00 USD), pocketing the profits. This has, of course, caused much controversy, as many people do not like the idea of, essentially, giving addicts drug money – even if they’re getting a good product in return.

Olsen, however, believes that the programme will achieve two goals: 1. He hopes that the information they are spreading through the magazine will aid in decriminalizing drug use in the country, and 2. it will give the addicts a job opportunity and in turn will lower crime and prostitution rates in the area.

While some people in the city are still opposing this project – as most of the earned money ends up back in the hands of heroin dealers – Olsen stands strongly behind his vision. In his eyes, the addicts are going to get the money some way or another, and selling a magazine with high-quality articles on relevant issues, is far better than say… mugging people on the street, burglarising homes or shops, or selling their bodies through prostitution.

The magazine articles focus on relevant social issues, with previous topics including the self-proclaimed “failed war on drugs” in Denmark, Portugal’s decriminalisation of heavy drug use and the apparent positive results, and a list of the top 20 most dangerous drugs with alcohol leading at #1. In the first month, Olsen had 5,000 magazines produced originally, but it was so well received that in the second month, production was increased to 10,000 copies.

But the question remains: Would you be willing to give $5.00 for a magazine – no matter how great it may be – to an addict, knowing that the money was almost guaranteed to be used to purchase drugs?