Vicodin Use, Abuse, and Addiction Part 1 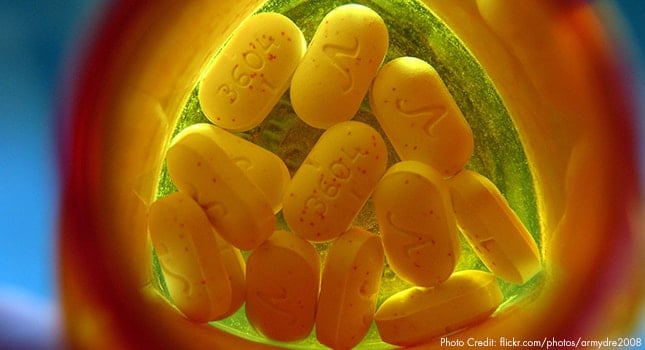 Vicodin is an opiate based, semi synthetic narcotic analgesic, and is the brand name of the popular painkiller hydrocodone. Vicodin also contains acetaminophen, which is a common pain reliever found in over the counter medications.

It is prescribed to relieve moderate to severe pain. Many people take Vicodin to ease their pain, but because of the feelings that it gives a person, users often begin to abuse it, this then leads to the person developing a tolerance, and then developing an addiction.

Depending on the amount of hydrocodone needed, will depend on which prescription for the drug is given by a doctor; such as, Vicodin, Vicodin ES, or Vicodin HP. There are other drugs that have the same chemical composition, but are found under many other names; these include: Anexsia, Bancap, Zydone, Dolacet, Lorcet, and Lortab.

It is a Depressant

Vicodin acts a depressant on the central nervous system, and stimulates opioid receptors in the user’s brain and body. The effects that Vicodin create in the user are mainly euphoria and relaxation. Some users will also experience lethargy, drowsiness, and mild anxiety. When this drug is abused, the user will build up a tolerance and have to take a higher dosage to feel the same effects that was once produced with a smaller dosage. As they continue to use, their body will become dependent and they will develop an addiction and have withdrawal symptoms if they stop.

Vicodin abuse means to overuse the drug for pleasure only. Abusing Vicodin may cause injury or damage to the user’s body, their brain, and to any of their social relationships. Their family, friends, coworkers, and anyone else involved in user’s life will be affected as well. Vicodin abuse does not necessarily mean that they have an addiction to the drug, but if they do not quit their abuse, they will eventually develop one.

Vicodin Abuse and Addiction is a Major Growing Concern

Vicodin addiction is one of the top growing concerns amongst rehabs and the problems that are facing countries throughout the world if this drug is continued to be handed out so easily. Treatment centers are seeing a huge increase in addicts wanting help, and hospitals are treating many people who are having reverse effects and overdoses are on the rise. In the last decade Vicodin abuse and addiction has become a very serious problem that is facing the medical community in America, Europe, and Asia.

How a Person Abuses Vicodin

Vicodin is one of the most abused drugs out of all the prescription medications on the market today. Users will swallow it in the original pill form or will crush it into a powder and snort it. When it is snorted, the user will feel a very intense high feeling, which will not last as long as it would when swallowed.

Most people who begin to abuse or develop an addiction to Vicodin, normally never deliberately meant to. Users often will get a prescription following surgery, an injury, or chronic pain. If the user feels that they are not getting the level of pain relief that they are wanting, they may begin to increase their dose; often more than directed by their doctor. This is the beginning of a tolerance, dependence, and addiction.

Some people who become addicted to Vicodin have never been given a prescription from a doctor, but they have bought it illegally on the streets. Vicodin in some countries is very easily obtained outside of a pharmacy or doctor’s office. Due to the low price of the drug on the streets, many people prefer using it compared to more expensive alternatives.

Vicodin abuse and addiction can be seen in those who have developed a dependence to the drug and that continue to take it despite any negative consequences to their well being, their relationships, or their finances.

A user can become physically dependent on Vicodin after abusing it for only a few weeks. Vicodin is a very powerful drug, and an addiction to it can destroy the user’s life and everyone involved in it.

Doctors are trained to look out for warning signs of abuse and addiction to the drug. However, people who abuse Vicodin are very good at hiding it, and oftentimes their abuse and addiction goes unnoticed. Many addicts will also go to different doctors and pharmacies to help get multiple prescriptions filled so that no questions are raised.