Use, Abuse, and Addiction of Trazodone 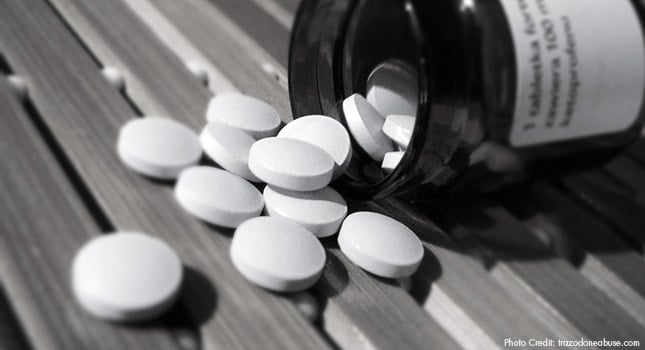 Trazodone is an antidepressant. It is sold under brand names such as Molipaxin, Trialodine, Desyrel, Trittico, and Trazore. Trazodone is used to treat depressing, insomnia, and anxiety. Sometimes, it is prescribed for OCD, cocaine addiction, and eating disorders.

Trazodone acts by changing the balance of the naturally occurring chemicals in the brain that regulate the transmission of nerve impulses between the cells. It increases the concentration of norepinephrine and serotonin, both chemicals stimulate nerve cells.

How a Person Abuses Trazodone

Unlike other antidepressants, Trazodone is less commonly deliberately abused. Users may begin to abuse the medication because their prescribed dosage is no longer working; this is because they have developed a tolerance to the drug. They will continue to up their dose while not only overusing it, but developing an addiction at the same time.

The second way a user abuses Trazodone is when they simply use the drug because they like the way it makes them feel. Abusers report that when Trazodone is sniffed, they feel a very high like, euphoric feeling.

What Does Trazodone Abuse Mean?

Trazodone abuse means to take too much of the drug just to feel its effects. People who abuse this drug are not only putting themselves at risk for developing an addiction, but they are also at risk for experiencing withdrawal, depression, and possibly family and work related problems.

Abuse of any drug almost always leads to a mental obsession and a craving for more of the drug. When a user does not stop their abuse, they will surly develop an addiction in little time.

Trazodone abuse and addiction may occur when a user has developed a tolerance to the drug. Addiction is almost certain when the user continues to take it no matter what the consequences may be. When it is abused, as the effects of the drug wear off, the user may take more, in doing so, they will be developing a tolerance and a physical and mental addiction at the same time.

The user may seem drunk or confused and they may fall in and out of sleep. Abuse or addiction to this drug can cause the user to seem completely unaware of what is going on.

An overdose on this drug can happen to any user, not just when a user abuses or has an addiction to the drug. Effects of an overdose on Trazodone will vary from person to person, but may include drowsiness, vomiting, or breathing problems.

Depending on how much Trazodone is taken and whether it is taken with other medications or alcohol, will depend on if serious effects will occur; sometimes these effects can be fatal. Anytime a person thinks they or someone they know is overdosing, contact emergency help immediately.

Withdrawal from Trazodone can be very difficult for anyone. Withdrawal symptoms will happen when a person has developed a tolerance and addiction to the drug. Many users do not have to abuse this drug in order to experience withdrawal symptoms. Unfortunately many users, who have never abused Trazodone, find out when they decide to quit, that their body has developed a physical addiction.

Some users who begin to go through withdrawal do not like the unpleasant effects and instead take more of the drug. Some withdrawal symptoms from the use or abuse of Trazodone include: irritability, aggression, dizziness, anxiety, blurred vision, loss of consciousness, headache, muscle pain, lack of concentration, insomnia, impaired speech, constipation, and loss of appetite.

It Can Improve Over Time

For most people, these symptoms improve with time. However, for people who are taking Trazodone as a sleep aid, stopping the drug suddenly might cause insomnia to come back worse than before; this is called ‘rebound insomnia’.

Sometimes, when a person stops taking an antidepressant, they not only experience withdrawal, but may have serious depression and even suicidal thoughts. It is important to have a doctor wean a Trazodone user off of the drug, anyone who abuses or has an addiction to it would greatly benefit by getting help at an addiction rehab.

Treatment for Trazodone Abuse and Addiction

For people who have a very strong addiction to Trazodone, they may go to a detox centre first; however, in most cases the person can go to an addiction rehab where they are weaned off the medication. They will then learn about their addiction and focus on the underlying problems that caused them to use and abuse this drug in the first place.

Statistics of Japan’s Rising Drug Use

Letting go of Anger: A Better Way than Drugs or Alcohol

Staying Sober During the Holiday Season