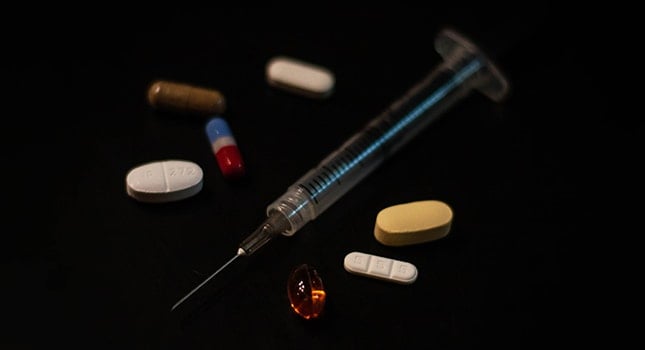 Heroin is a processed drug from morphine and typically is sold as white or brown powder. It causes the user to feel euphoria with limited mental and physical abilities. Prolonged use can not only cause addiction, but collapsed veins, skin infections, diseases, and overdose, which can be fatal. Heroin turns many addicts into complete slaves. All they want is more of the drug and will normally do anything to get more.

Heroin is a processed drug from morphine and typically is sold as white or brown powder. It causes the user to feel euphoria with limited mental and physical abilities. Prolonged use can not only cause addiction, but collapsed veins, skin infections, diseases, and overdose, which can be fatal. Heroin turns many addicts into complete slaves. All they want is more of the drug and will normally do anything to get more.

Withdrawal symptoms are said to be very intense with the worst occurring in the first 48-72 hours. Many heroin addicts are given medication to help with the withdrawal; such as, Naloxone or Buprenorphine. A rehab will carefully monitor the individual and care for any needs that they may have during and after this process. Additionally, behavioural therapy and counseling can help an addict overcome this addictive drug.

Vicodin, hydrocodone, is an opioid and is given to people who have moderate to severe pain. It causes a sense of euphoria which is one of the reasons it is so addictive. Vicodin has many side effects other than addiction; some of these include a slowed heartbeat, vomiting, circulatory collapse, cardiac arrest, overdose, and even death. Many addicts report that they will also consume alcohol with the addictive drug; this is known as ‘going to VikeLand”. Some users will actually start becoming addicted to alcohol as well if this is done on a regular basis.

Like any opioid addiction, withdrawal from Vicodin can be unpleasant. This power of this addictive drug can be overcome with the help of professionals. Treatment at a rehab will include counseling, therapy, and exercise; all of which are very helpful for an individual to begin their path to recovery.

Valium, Diazapam, is another prescription medication and is given to treat anxiety, stress, and panic attacks. It produces an intense calming effect and is highly addictive. Other than drowsiness and impaired motor function, the user is at risk for overdose and addiction. Withdrawal from a valium addiction is slightly different from other withdrawals. In this case, the first few days users are said to have minimal symptoms which increase around day four to six.

Although this is a legal drug, it is seen as a serious problem within the rehabilitation industry and is considered to be a highly addictive drug that many users will develop an addiction to if they are not careful. Throughout the world people are battling with addiction and the consequences that follow this drug; luckily with proper treatment sobriety can be regained.

Xanax, Alprazolam, is given to individuals in the form of a prescription. It is prescribed for stress, anxiety, and depression. It has calming like effects and is just addictive as Valium with similar side effects. This drug is commonly given out by doctors and has been marketed to the general public as a safe drug to help relieve stress. This has resulted millions of people around the world to have an addiction.

Withdrawals are very intense; any addict wishing to cease their use should always seek treatment when coming off of Xanax or any other depressant. A rehab will help the individual get through their withdrawal and overcome any emotional, physical, and mental feelings they are experiencing. Xanax withdrawal can be tough, but with the right help an individual can beat their addiction this horrible drug.

Illegal and Legal, Both are Addictive

While many people believe that illegal drugs are the most addictive drugs in the world, while some are, most o f these addictive drugs are actually legal and obtained through a prescription. These not only include the ones above, but also include Ritalin, Demeral, and Oxycodone.

It is important to realise some of the substances listed in these articles are considered to be more dangerous than others; in any case, getting proper treatment is essential.

The Most Addictive Drugs in the World Part 1

What Rules Can I Expect in a Drug Rehab?

Prescription Painkillers: The Gateway to Heroin?