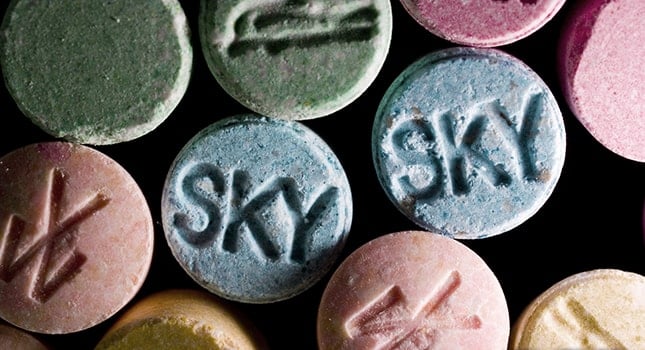 MDMA / Ecstasy has become a popular drug in many parts of the world and has serious side effects in the user. In this article we will look at the short term effects that MDMA / Ecstasy has on the user, and also the long term; such as, long term brain damage.

MDMA was a drug used for psychotherapy in the 1970′s by psychiatrists, but now it is one of the most popular recreational drugs in the world. It is most popular in the club and rave scenes around the world.

2 Ways to Use and the Different Effects

Ecstasy mainly comes is tablet form and is swallowed by the user. Swallowing Ecstasy can cause many side effects for anyone who takes the drug orally; such as, upset stomach, vomiting, dry mouth, and intestinal failure.

MDMA can come in a powder form and the user will snort the drug using a straw, rolled up money, or glass tube. Snorting the drug can cause the user unwanted effects; such as, runny nose, stuffy nose, nose bleeds, and sore throat.

MDMA enters the user’s brain and causes the release of serotonin, norepinephrine, and dopamine. Once the user takes the drug, it generally takes 20 to 60 minutes for the effects to begin.

The effects that are most commonly experienced are: euphoria, sense of well being, and an increase in energy. Dehydration is common in users who take MDMA / Ecstasy, and this can be fatal if the person does not keep hydrated.

MDMA / Ecstasy users are at risk for many long term problems; such as, depression, constant drowsiness, anxiety, paranoia, impaired short and long term memory, stroke. Some long term users of MDMA / Ecstasy have serious brain damage that will leave them mentally disabled for life.

In the last 15 years many researchers have been looking into the effects that MDMA / Ecstasy has on the user’s brain. It has been reported that many long time abusers of the drug have caused permanent damage to their brain. Sometimes this leaves the person unable to understand even the simplest things; such as, simple math or shape matching.

The drug causes rapid eye movement, chills, sweating profusely, teeth clinching, and nausea in many users. MDMA / Ecstasy has many physical effects to the body that causes long term damage; such as, abnormal electrical activity in the heart, destruction of blood vessels, organ damage, abnormal beating of the heart, liver damage, and damage to crucial areas of the brain that are responsible for memory and thought. Other physical effects can cause the user to have a stroke or heart attack.

The psychological effects of MDMA / Ecstasy include confusion, mania, delusions, disorganized thinking, derealization, panic attacks, and anxiety. Some of these effects can cause the user to put themselves in dangerous situations, which can be fatal.

Users of the drug normally report that when they stop using they feel depressed. Some people at this point will take more to numb out these negative feelings. If the user continues to use the drug over and over they will develop on addiction. Once an addiction develops, it will become extremely difficult for the user to quit without professional help.

There are many signs that are easy to recognize when a person is using MDMA / Ecstasy; such as, extremely compassionate, dilated pupils, dry mouth, high levels of energy, and grinding of teeth. Many users will have difficulties speaking and may forget simple words when they are under the influence of the drug.

People who binge use MDMA / Ecstasy are the users that most commonly overdose. Binge use is normally how a tolerance to the drug occurs. The user will then take more and more to get the same desired effects. If the user continues to use, they will most likely develop an addiction.

If the user has become addicted to MDMA / Ecstasy and wants to quit, the best option is going into a rehab centre. Most addicts will need to stay between 30 to 90 days depending on how much they used and how often.

MDMA / Ecstasy addiction has destroyed many addicts’ lives and the lives of the people who are closest to them. If you have developed an addiction to MDMA / Ecstasy and want to stop using before it is too late, contact The Cabin Chiang Mai today.