January 19, 2016Michael ShannonBlog, Youth Addiction Treatment
New report on teen drug use shows that fewer teens think that smoking weed daily is harmful — but are they setting themselves up for addiction? 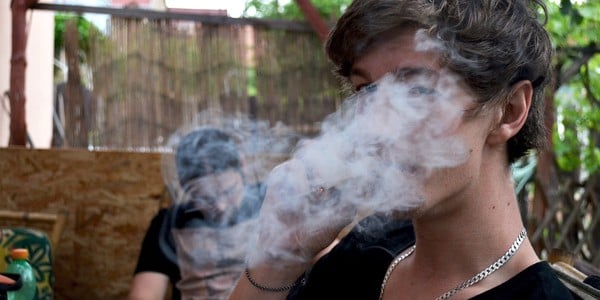 According to a new report, high school seniors in the United States are now smoking more marijuana than cigarettes on an everyday basis. Teen drug use is a constant concern and the new report is based on a large scale survey about teen drug use called ‘Monitoring the Future’ funded by the National Institute on Drug Abuse (NIDA). The survey is conducted each year by researchers from the University of Michigan, and is given to 45,000 eighth, tenth, and 12th grade students at public schools across the United States. In 2015, six percent of high school seniors reported that they smoked marijuana every day, approximately the same percentage as in 2014. However, of the same group only 5.5% reported smoking cigarettes daily, down from 6.7% in 2014. This means that for the first time since the study’s inception in 1975, daily marijuana use has become more common than daily cigarette use among teenagers. In response to the survey’s results, Dr Nora D Volkow, director of NIDA, released a statement saying, “Continued areas of concern are the high rate of daily marijuana smoking seen among high school students, because of marijuana’s potentially deleterious effects on the developing brains of teenagers, and the high rates of overall tobacco products and nicotine containing e-cigarettes usage.”

More on Teen Drug Use in the United States

Teen drug use outside of marijuana was also assessed in the Monitoring the Future survey, and it showed the use of some illicit drugs, as well as the use of alcohol, has been declining slightly. For example, the use of K2 or synthetic marijuana has declined from 11.4% in 2011 to 5.2% in 2015. This is a positive sign since K2 has made headlines for killing young people who often believe it is a safer alternative to smoking weed. In a separate report released in October 2015 on teen drug use, the United States Centre for Disease Control and Prevention (CDC) also found that regular marijuana use by teenagers has now surpassed that of tobacco use. In their study from 1997-2013, the CDC found that overall cigarette use had declined 64% in that time period. However, overall marijuana use had increased, and since 2010 21% of students reported using marijuana in the past 30 days compared to 19% who had smoked cigarettes. The report cautions that the advances in teen health resulting from reduced cigarette smoking are counteracted by increases in marijuana use. Recreational weed use among teenagers is alarming for many reasons including the risk for developing cognitive, psychological, and respiratory problems as well as marijuana addiction.

Marijuana vs. Tobacco: Why are Teen’s Perceptions Changing?

The perception of marijuana by teenagers as a dangerous drug has been on a steady decline since its peak in 1991 when 79% thought regular use was harmful. Now only 31.9% of seniors believe regular marijuana use may be harmful. At the same time, significant progress has been made in changing the public’s perception of the harm of tobacco use over the past 20 years. This is in part due to major tobacco prevention and control strategies including increasing tobacco product prices, adopting smoke-free laws, and implementing national public education media campaigns. Changes in marijuana laws including the legalisation of medical and recreational marijuana in some states, without concurrent public health education to address the potential detrimental health effects of marijuana use, have influenced the perception by teenagers that the drug is not harmful. Twenty-three states and the District of Columbia in the US now have some form of legalised marijuana. Alaska, Oregon, Colorado, and Washington have all legalised marijuana recreationally. Many other states have also legalised medical marijuana. However, in states that allow recreational marijuana use, the laws clearly do not condone, and still prohibit marijuana possession and use by teenagers. Many would argue that overall changes in teenagers’ perceptions about marijuana are also in part fuelled by dangerous misperceptions about potential harms of marijuana use, including the belief that marijuana addiction is impossible. The truth is, however, that alcohol, tobacco, marijuana, and illicit drug use can all cause short and long term harm to individuals — especially teenagers.

Marijuana Addiction and other Potential Harms of Teen Marijuana Use

We are now beginning to understand how to effectively address and prevent teen drug use, but more drug education strategies are necessary, especially in light of changing marijuana perceptions and usage trends. Talking about the facts, rather than using scare tactics or oversimplified or exaggerated slogans, is one of the best approaches when educating teens about drug effects. Also, parents should play an active role in preventing teen marijuana use by setting clear expectations and setting a positive example. When it comes to marijuana use many teens are not aware that marijuana addiction is a potential consequence. But in fact, marijuana addiction is the third most common reason someone attends drug and alcohol rehab in the United States, only after alcohol abuse disorders and heroin and other opiate addictions. The risk of developing marijuana addiction increases among people who start using in their teens and among daily marijuana smokers. With 6% of seniors already using marijuana daily, and almost half of teens having tried it at least once, the potential for future cases of addiction is significant. The CDC still refers to marijuana as a gateway drug, and while this is controversial, the illegality of marijuana means that teens who buy the drug are more likely to be exposed to drug dealers who are selling more addictive and dangerous drugs. Like tobacco use, heavy marijuana use also has detrimental health effects including respiratory problems and impaired cognitive function. It can also exacerbate certain mental illnesses. If you are concerned about your own or your teen’s marijuana use there is help available. Marijuana addiction does occur and can have detrimental effects on a person’s overall wellness. You may need help to stop marijuana use and attending a marijuana rehabilitation centre could get you on the track towards addiction recovery.