A new study done by the University of Pittsburgh reveals statistics you need to hear regarding the link between social media use and depression. Learn about its findings and the treatment of depression and compulsive social media use. 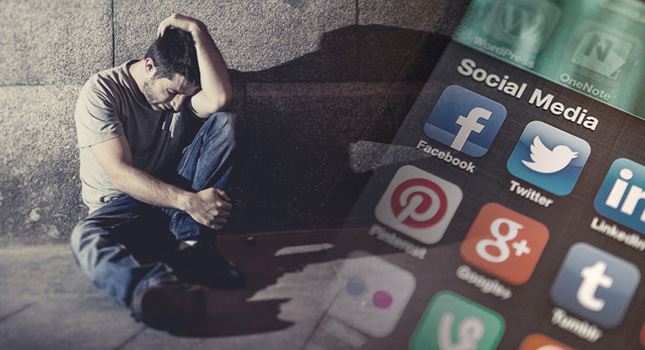 The University of Pittsburgh School of Medicine recently conducted a study to examine the correlation between social media use and depression. 1,787 people in the U.S. aged 19 to 32 were asked to fill out a questionnaire that detailed their use of social media on the most common platforms: Facebook, Twitter, YouTube, Google Plus, Instagram, Snapchat, Reddit, Tumblr, Vine, Pinterest and LinkedIn while other questions asked for information that could be used to assess their level of depression on the PROMIS Depression Scale.

Does Social Media Cause Depression?

As with previous studies on this subject, the question of cause and effect still remains. Does using social media cause depression, or are people who are already suffering from depression more likely to spend increased amounts of time online?

Lui ui Lin, B.A., lead author of the study, stated that “It may be that people who already are depressed are turning to social media to fill a void.” However, she also went on to explain that the use of social media may cause depression and in turn may also cause an increase of social media use – almost a vicious circle of cause and effect.

Examples of ways that social media use can contribute to depression are:

The Link between Depression, Social Media and Internet Addiction

Excessive or compulsive use of social media falls under the umbrella of internet addiction, and as with all types of addiction including drug and alcohol addiction, depression is a major risk factor and a frequently co-occurring disorder.

The debate of whether addiction fuels depression or depression fuels addiction is one that has been going on for a long time. However, it is very common to find that depression and addiction (of all types) go hand in hand. When seeking treatment for depression and/or compulsive social media use, it is important that both disorders are treated simultaneously.

Symptoms of Excessive Social Media Use and Depression

Even though the debate over which behaviour leads to the other is still ongoing, what is clear is that the two are linked in some way, and in some cases professional treatment may be needed. Excessive social media use could require treatment when the following symptoms occur:

Likewise, depression has many symptoms of its own including:

If you are experiencing any of the above symptoms, you may be suffering from internet addiction and/or depression, and should speak to an experienced addiction and mental health counsellor to find out more about your personal situation and how you can get help.

The Effects of Social Media on Mental Health

Dr. Primack, vice chancellor for health and society at the University of Pittsburgh, hopes that this study can be the basic groundwork to gain more information in the future. “All social media exposures are not the same,” he stated..”Future studies should examine whether there may be different risks for depression depending on whether the social media interactions people have tend to be more active vs. passive or whether they tend to be more confrontational vs. supportive. This would help us develop more fine-grained recommendations around social media use.”

So although the most recent study on social media use and depression is not entirely conclusive on the exact effects that social media is having on people in society, it is a valuable contributor to the conversation surrounding depression and internet addiction.

Seeking Treatment for Depression and Compulsive Social Media Use

If someone you know seems to be using the internet or social media excessively and is also showing signs of depression, talk to them. The sooner the problem is out in the open, the sooner they can get help, and the better their chances are of a successful recovery – leading to a life of happiness and fulfillment.  Complete abstinence from internet use is not realistic in today’s modern world, which is why The Cabin Chiang Mai uses a unique treatment method, Recovery Zones, created specifically to treat those addictions in which abstinence is not possible.  Our treatment programme teaches clients the coping skills and tools necessary to develop healthy internet usage patterns and has a 96% completion rate.  Our experienced counsellors also specialize in co-occurring disorders such as depression.  Contact us today for a free, no-obligations assessment on addiction and mental health to see how we can help.