Percocet Use, Abuse, and Addiction 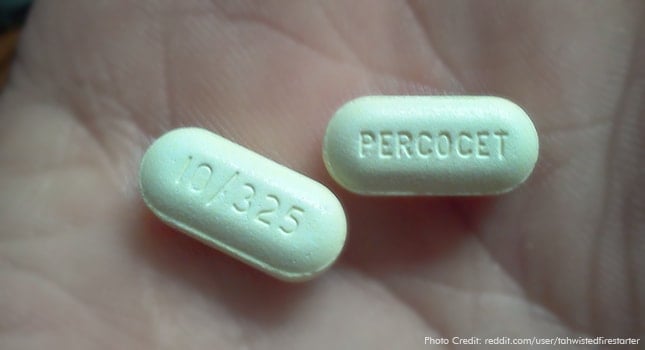 Percocet is an opiate pain reliever that is made up of Oxycodone and acetaminophen. It is given to people to help relieve pain after surgery, or to reduce the discomfort associated with arthritis and back pain.

How a Person Uses and Abuses Percocet

Percocet is a highly abused drug. It comes in a pill from that is meant to be swallowed, although people who abuse it commonly crush it and then snort or even inject it. When it is snorted or injected, the effects are felt within minutes, although they will not last as long as they would if swallowed.

The Oxycodone that is in Percocet binds to the brain’s dopamine receptors. This produces intense feelings of pleasure and well being. When a person abuses Percocet, they often develop a tolerance, dependence, and an addiction.

An Addiction Can Happen Quickly

Many people take Percocet to ease their pain, but because of the euphoric like feelings that the drug produces, it is not uncommon for users to begin abusing the drug. Even more alarming is that a user can develop a Percocet addiction in as little as three weeks of continual use or abuse.

There are also user’s who may take Percocet to simply feel its euphoric effects. In any of these situations, the person is abusing Percocet, and if the user does not stop, they will develop an addiction.

What Does Percocet Abuse Mean?

Percocet abuse is defined as taking the drug in any variation differing from a doctor’s orders. This might include taking it too often or in larger doses than prescribed. Users often abuse it for pleasure only.

People who begin to abuse or develop an addiction to Percocet normally never intended to do so. Normally it begins when the person gets written a prescription following surgery, an injury, or chronic pain. The user may feel like they are not feeling the same original effects, they may then increase their dose without a doctor’s recommendation. They have now developed a tolerance, and as they continue to increase their dose they will be developing dependence and an addiction.

When a person abuses Percocet they may begin to cause harm to their own body, their social surroundings, and possibly loss of all their money. Anyone who is involved in their life will begin to be affected by their abuse, especially if they do not discontinue it. Percocet abuse does not necessarily mean that the user has an addiction to the drug, but if they do not quit their abuse, they will eventually develop one.

Percocet is both physically and emotionally addictive. Unfortunately, most people who have an extended prescription for Percocet will find themselves physically addicted to the drug very quickly. A Percocet addiction happens when the user is unable or does not want to stop. If they do stop they suffer intense cravings for the drug; cravings that normally lead to the user seeking out more and more of it.

Hard to Detect, At First

Percocet abuse and addiction can be very difficult to detect. When a user is knowingly abusing Percocet, they will most likely be very good at hiding their abuse or addiction. Overtime, Percocet abuse will reduce the user’s ability to think rationally or be fully aware of their surroundings. Abuse or addiction may also cause confusing thoughts or unusual behaviour. When the user decides to quit, they will experience withdrawal and this can be very noticeable.

People who abuse or have an addiction to Percocet may experience various physical symptoms. Which symptoms the user will experience will depend mainly on two factors: how long they have been using and how much they are using.

Abuse Can Be Fatal

Is Australia’s “Ice Epidemic” Hyped out of Proportion?