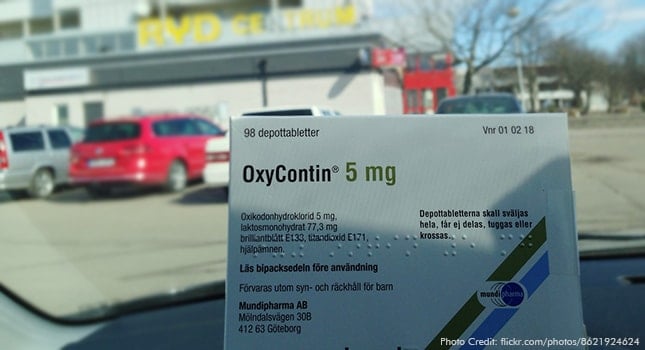 Oxycodone is an opiate that is similar to Morphine. It is prescribed to treat moderate to severe pain that is caused by fractures, childbirth, cancer, and other conditions. Many people take the drug to relieve pain, but because of the feelings it gives a person, people often abuse it, build a tolerance, and develop an addition to OxyCodone.

The drug is found in brand names such as OxyContin, Percocet, Percodan, and Tylox.

OxyCodone acts a depressant of the central nervous system and stimulates opioid receptors in the user’s brain and body. This produces analgesia, respiratory depression, and a euphoric like feeling.

What Does OxyCodone Abuse Mean?

OxyCodone abuse means to use the drug for pleasure only. When someone abuses OxyCodone, they will not only be physically and emotionally harming themselves, but they will also be harming everyone in their life. OxyCodone abuse does not necessarily mean that the user will have an addiction to the drug, but if they do not quit their abuse, they will develop one.

How Does a Person Abuse OxyCodone

OxyCodone is often abused. Users swallow it in the original pill form or crush it into a powder and then snort it. This drug can also be melted in water and then injected, this form is normally common in user’s who abuse OxyCodone heavily.

OxyCodone is a time-release medication, when it is snorted or injected, the user will feel a very intense rush that involves high feelings and euphoria. Someone who abuses OxyCodone or has an addiction to the drug may have originally begun taking it for pain relief and overtime developed a dependence. There are also people who have never been prescribed OxyCodone, but have bought it on the streets.

Effects of an Abuse and Addiction

OxyCodone abuse will make a person develop a dependence to the drug, and if they continue to take it despite any negative consequences that may occur, this is an addiction. OxyCodone abuse and addiction is very serious and can be very detrimental the user’s health.

Addiction to OxyCodone can develop quickly and often goes unnoticed for quite some time. When a person uses OxyCodone they may seem to have a loss of motor function, slurred speech, and can become drowsy. Sometimes, a user will increase their use of the drug, once the effects have worn off. When they do this, they will develop a tolerance and be developing an addiction at the same time.

When the user does not swallow OxyCodone but snorts or shoots it, the drug is released into the user’s system at once, instead of slowly over a period of time. This large dose can cause a person to have an overdose.

OxyCodone also causes very slow breathing, if a user begins to have less than ten breaths a minute, it is likely they are overdosing or having an adverse reaction to the drug. Sometimes, an abuser of OxyCodone may seem drunk when they are overdosing; people around them may think to let the user sleep it off. When the user goes to sleep, they may not wake up.

Signs of an Overdose

It Can Be Fatal

In severe cases of an overdose from OxyCodone, the user may have very low blood pressure, slowed heartbeat, slowed breathing, cardiac arrest, coma, and even death.

Withdrawal will happen to someone who has an addiction to OxyCodone and abruptly quits taking the drug. Their body will begin to go through a terrible and very painful withdrawal.

Fortunately, unlike some other drug addictions, OxyCodone withdrawal is highly unlikely to be fatal. However, there has been cases of user’s having seizure and convulsions, which can be serious. For this reason it is important to get treatment for an OxyCodone abuse and addiction.

Symptoms of an OxyCodone Withdrawal

Treatment for OxyCodone Abuse and Addiction

Treatment for an OxyCodone abuse and addiction will most likely begin with a detoxification. This is critical for a successful recovery, because it helps eliminate cravings and gets rid of harmful toxins that were deposited in the user’s body during their use. During detox the user will be gradually weaned of OxyCodone. This will make the withdrawal symptoms less intense.