Obesity in America Still on the Rise — is it Linked to Food Addiction? 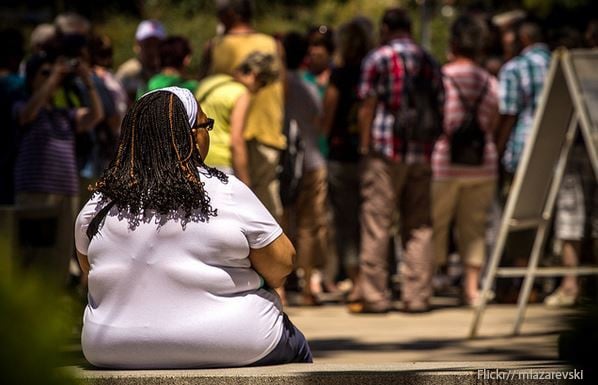 Despite efforts to decrease obesity rates in America, studies have found that lower income families are still at high risk, and the cause may be hidden food addiction.

Especially amidst years of nationwide initiatives to bring awareness to the negative health effects of obesity and offer solutions to the problem, the news is not promising. Sugary drinks such as soda were targeted as a culprit, and it has led to a 25% decrease in full-calorie soda intake since the late 1990’s, plus other slight improvements in the American’s diets. So why are adult obesity rates in America still rising?

According to Dr Walter Willett, the chairman of the nutrition department at the Harvard School of Public Health, just looking at the average U.S. obesity rate hides a lot of detail. A report he contributed to found that while overall there have been slight improvements in dietary habits of Americans, there was a large gap between socioeconomic classes. People with lower incomes did not see the same advances and improvement in their diets than those with middle to higher incomes.

Obesity researcher from the University of Washington Adam Drewnowski wanted to get a better understanding about why, contrary to historical trends, those with lower incomes are now most likely to be overweight.

From an economic perspective, if you are shopping on a budget the most rational strategy is to purchase typical junk foods. But these low cost, high-calorie processed foods are also high in sugar, salt, and fat. This manufactured combination creates what are called ‘highly-palatable foods’ which are not only related to weight gain, but are also the underlying culprit of food addiction.

Is Food Addiction the Missing Link in Tackling Obesity Rates in America?

Obesity is generally attributed to three main causes: excessive calorie intake, thyroid disorders, and lack of physical activity. While economics may play a part in the intake of high-calorie junk foods, for many people their experience with these foods becomes more complex and actually mirrors the experience of those suffering from a drug addiction.

Studies show that certain foods can impact the brain in the same way as drugs such as cocaine and heroin. People want to stop eating foods they know are bad for them, yet find their cravings and impulses are too strong. Their eating behaviour may become shrouded with shame and guilt, they continue to eat junk food as an escape, and eating these foods may eventually become the only way they can experience pleasure. Despite growing negative consequences including serious health problems, social isolation, and emotional problems some people cannot stop themselves from overeating.

One study of teens and their experience with obesity found that many actually met the criteria for substance dependence — except instead of drugs or alcohol their ‘substance’ of abuse was specific foods. The teens in the study stated that information about how to eat a healthy diet was readily available to them, but what they wanted and needed was information on how to effectively manage food cravings.

Current strategies for reducing obesity rates in America generally focus on offering education about healthy eating habits and community involvement in promoting an overall healthy lifestyle that includes making better food choices and exercising more often. These are great prevention strategies and the good news is that childhood obesity rates in America are decreasing, as this is where a lot of the efforts have been focused, including first lady Michelle Obama’s Let’s Move campaign.

However, for those who are struggling with obesity as a result of an underlying food addiction, simply making healthier choices is like asking an alcoholic to simply choose not to take that next drink.

This could be why, despite interventions, obesity rates in America are not changing. Addiction requires holistic treatment that addresses underlying emotional aspects such as deep seeded shame, guilt, and low self-esteem, while also providing ongoing support and strategies for managing cravings and triggers.

Support and Treatment for People Struggling with Addiction to Food

Addiction to food is considered a process addiction. Obesity rates in America could possibly reflect unrecognised and untreated addictions to food. Of course, not everyone suffering from obesity is also struggling with an addiction to food, and in fact not all food addicts will become obese. However, for many people their addiction to food is serious and they will need support in order to overcome it.

Overeaters Anonymous is a 12 Step support group for people struggling with compulsive overeating and binge eating. Similar to Alcoholics Anonymous, these support groups are peer led and offer a safe and supportive environment where people can share their stories and work towards recovery.

Getting specialised addiction treatment can help people address all the underlying psychological, social, and biological aspects of their behaviour in order to enter recovery. Some addiction treatment centres, such as The Cabin Chiang Mai, are equipped to offer treatment for people suffering from addictions where complete abstinence is not possible – such as with food and sex addictions.

Through one-on-one counselling, group work, exercise therapy, and the Recovery Zones treatment and relapse prevention programme, clients at The Cabin have successfully overcome their eating addictions.

Given the recent release of disappointing obesity rates in America, it seems the country must begin rethink the best methods of how to tackle this epidemic. Hopefully as more and more research emerges detailing the addictive nature of high-sugar and highly-palatable processed foods, interventions that are addiction specific will become more prevalent in the fight to reduce obesity in America.