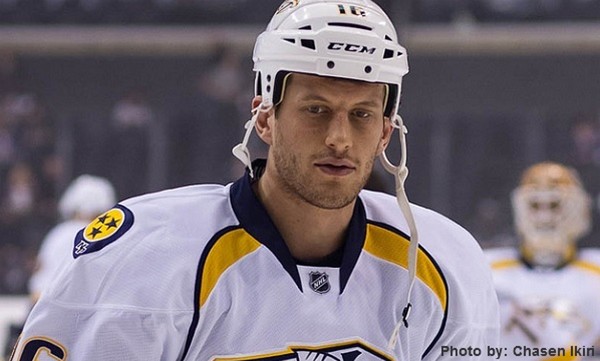 Clune hopes that by sharing his story, he can encourage other addicts to reach out for help – before it’s too late.

The National Hockey League (NHL)’s Rich Clune, who plays Left Wing for the Nashville Predators, released a very personal account of his struggles with drug and alcohol addiction on instarad.io two weeks ago – just over a year after coming out as an alcoholic to ESPN.com’s Scott Burnside in March 2013. Since becoming sober around 2011, Clune has been doing everything he can to spread his message of hope to fans and people around the globe: “I don’t drink. I don’t do drugs. And my life is amazing.”

This, of course, comes after many years of alcohol abuse and almost losing his shot at an NHL career – a career which so many young North Americans dream of. A native of Toronto, Canada, Clune picked up his first hockey stick at the age of 2 and, according to his mother, instantly fell in love with the game. At age 13, Clune found his way to his first alcoholic drink – and claims that even at such a young age, he was battling between the sensation of consuming alcohol, which he very much enjoyed, and the internal voice telling him that it was something he knew he should not be doing.

Over the years, however, as he was picked up by provincial hockey leagues, his life careening smoothly towards a shot at the NHL – his dream was getting closer, but he was more frequently tuning out “real life” with alcohol. Thankfully for him, he was still getting goals, and his career was miraculously progressing despite his problem with alcoholism. “From the outside,” he said, “you feel you have everything going for you, but inside you’re hurting.” “The more I scored, the more I partied,” he also claimed; which was the cause of his showing up at practices completely hungover “all the time.”

His teammates began noticing his behaviour and distancing themselves. Some even went so far as to call him names and insult him both behind his back and to his face. At one point, while still playing at the provincial levels, he asked for a trade to another team, hoping that a change of location would help him curb his alcohol problem. Of course, however, the problem followed him to his new team.

Clune admits that at that time he believed alcoholics to be the age-old stereotype of a homeless man on a park bench or in a back alley. However, almost four years ago, Clune was an NHL player making excellent money, getting lots of attention from girls, and yet he sat in his Los Angeles hotel room unhappy and unhealthy, feeling as though he couldn’t go on living – at least not like he was. It was then that he did the only thing he could think of – he called his parents and asked them for help.

In his original interview with ESPN.com his parents spoke of their worry, their guilt, and the complete devastation they felt when they found out their son had a problem. But they stood by him through inpatient and then outpatient treatment to combat his addiction.

Now, his mom is proud to say that helping him through his problem has only brought their family closer. And Clune hopes that by telling his story he will be able to help at least one person reach out for help before they slowly die of their addictions.

At The Cabin Chiang Mai, we admire Rich Clune for opening up about his life in recovery. Every time a public figure talks openly about their struggles with the disease of addiction, it does some good for derailing the stigma that surrounds it. In the U.S.A. alone, approximately 23 million people are struggling with the disease of addiction, and yet only 10% of these people ever get the treatment they need.  As Clune says – if his story can help at least one person to come forward and get the treatment they sorely need and deserve – it’s all worthwhile.

If you or someone you know is struggling with an addiction to drugs or alcohol, contact a professional today for more information on getting the right treatment.

Making Amends is More than Just an Apology