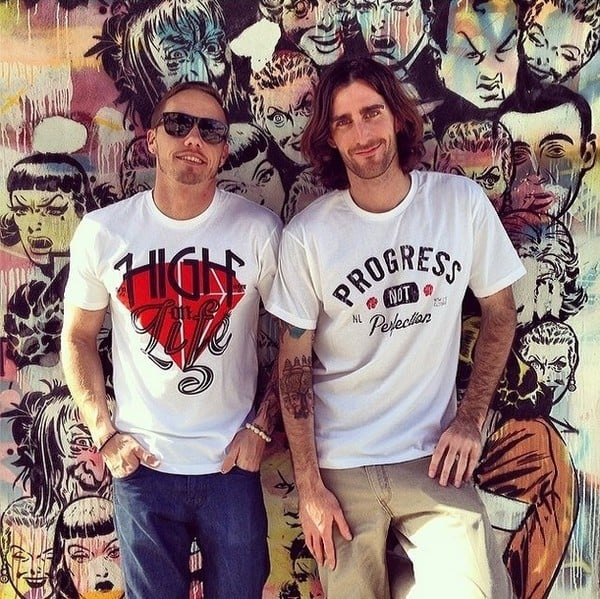 Tim Stoddart, co-founder of New Lyfe Clothing Co., opens up about his recovery and the ideas behind this pro-sober clothing line. “We just want to try and bring some light to the concept that being sober doesn’t mean being boring.”

Founded by two ‘regular’ guys in recovery, New Lyfe Clothing Co. is a totally hip and modern clothing company that focuses on celebrating those who are living in recovery. A Florida-based company, New Lyfe got its start in May 2013 by founders Tim Stoddard and Josh Butcher to not only celebrate sobriety, but to give people a cool clothing option that doesn’t glorify drugs and violence like many brands do. Since then, their following has grown very quickly, as they produce a fresh style of clothing that not only sober people would be proud to wear.

Each of the shirts and accessories are designed themselves, and each design has a story to tell – which is proudly displayed on their website. The ‘Original Gangster’ shirt for example, is an ode to Bill W, the founder of AA. The ‘Don’t be a Statistic’ tee is a tribute to icons lost to addiction and showcases the faces of Jimi Hendrix, Janis Joplin, Marilyn Monroe, Heath Ledger (The Joker), and Kurt Cobain.

Seeing recovering addicts doing something so positive with their lives is downright inspiring, so we recently interviewed founder Tim Stoddard (who is also the mastermind behind the rapidly growing recovery community Sober Nation) to find out more about his and Josh’s own recovery lifestyles – and of course – the full inspiration behind New Lyfe.

Interestingly enough, Tim and Josh are both fans of the 12 Steps method – of which we implement a modified version here at The Cabin as one part of our progressive treatment model. Check out what else inspires Tim, as he may just inspire your recovery as well.

An Interview with Tim Stoddart of New Lyfe Clothing Co.

The Cabin: First off, what was your inspiration for the clothing line?

Tim: Obviously we are inspired by our recovery, but we know everyone has a story to tell. It’s no secret that we are both sober, but we don’t want to be a “sober clothing line.” Anyone who has gotten through a hard time can relate to New Lyfe. We just want to represent positivity and a good lifestyle.

There are so many lines that glorify drug use and crime and other shit – we are not saying that those brands are bad. We really don’t care much what other people decide to do with their lives. We just want to try and bring some light to the concept that being sober doesn’t mean being boring. That being healthy and staying away from the party scene isn’t a bad thing. The party life looks very exciting from the outside, but take it from me – it catches up to you and it’s not as cool as it looks. You can be cool and have fun and not get shit-faced.

The Cabin: Your website states that the brand inspires people to “bee” yourself, “bee” original, and “bee” whatever you want to be. Can you tell us a little about what makes you each unique? What are your dreams for the future?

Tim: It has always been tough for us to really answer what our dreams are. We both dream of bringing New Lyfe to a worldwide level. It’s funny just because we feel like we are living our dream right now, so we see it more as just continuing to improve and move forward in all of the things we do.

What makes us unique? Well… neither of us have a problem being ourselves. I think that alone is hard to come by.

The Cabin: In an interview for Sober Nation you said “We want people to understand that there’s multiple ways to get and stay sober and no particular way is the only way.” Would you mind sharing with our readers what treatment methods you both used to get sober?

Tim: I am pretty sure both of us got clean through the 12 Steps. It is safe to say over time that we have both evolved in our recovery. We talk a lot of higher power and energy in the Universe. It seems to be pretty consistent in our lives that if you just go with the flow of life, then good things come your way. “Listen to the Universe.” That would be a good shirt idea.

The Steps are great. We wouldn’t be here without them. All we are trying to say is that if someone finds another means to get clean or make progress in life, then who are we to say we know better? I like to support people in whatever they do.

The Cabin: What has the most difficult part of your recovery been? Was there anyone in your life that was/is a particular mentor to you?

Tim: The first year was really hard. Without a doubt it was the hardest. I don’t know if I ever had a mentor. Obviously my father is a big mentor to me, and my sponsor as well. If I am being honest my sister was the biggest motivator for me. I knew that out of everyone I couldn’t let her down. She really helped me.

The Cabin: You say that you still go out and party at bars and nightclubs (but without the alcohol or drugs). In fact, you guys just spent a weekend in Las Vegas. Was there a time after recovery that this wasn’t possible? How do you maintain sobriety in these settings when surrounded by people fuelled on drugs and alcohol?

Tim: There was totally a time when this wasn’t possible. And don’t get me wrong, it’s not like we go out to clubs every weekend. We get together a lot and eat and sit by the fire. The point is that if you want to go to a nightclub, there is nothing stopping you. You just have to look at what your intentions are.

It is a lot easier to do these things when you have a strong group of people around you who support your recovery. Maybe you don’t like clubs and that’s fine. We are not saying that you should go to clubs every weekend. We are saying that you can do and be whatever you choose. Just be yourself. If you like dancing, go dance. If you like tennis or Pokémon cards or baseball or whatever. Do what makes you feel good and don’t let addiction hold you back.

The Cabin: One of your blog posts stated that you don’t want to necessarily be labelled as a “sober clothing” line, because, as you stated – clothes can’t be sober or not, they’re clothes. You receive a lot of feedback from customers – do you think that most of them are living a sober lifestyle? Or do you have many followers that support the brand for other reasons?

Tim: Most of them are sober. We are not kidding ourselves. Sobriety is the glue that holds New Lyfe together. As I said before it’s really a lot more about taking sobriety and expanding from there.

With that being said, there are plenty of people who buy and wear New Lyfe that aren’t in recovery. Maybe some of them support a family member in recovery. Also, a lot of our designs appeal to a broader audience. For instance the High on Life tank – the message behind that is pretty omnipotent.

The Cabin: You posted a blog “Why we do what we do” about a customer who emailed you with his gratitude, but also he had some questions regarding starting a company of his own. You said “You can count on the fact that we will help this guy with whatever he may need.” Did you follow through? Are there other customers that you’ve reached out to in a way that didn’t involve selling them clothing?

Tim: I can’t remember if we helped him or not. I know that if he got back to us we would have. Believe it or not we have developed a few really close personal relationships through our brand. We actually just met a friend in California this weekend through New Lyfe. He reached out to us one day and we kept in touch and since we went on the trip we called him and he met us in Venice Beach. We walked around and hung out. I was wearing the Against the Grain Tank that isn’t released yet. I took it off my back and gave it to him. I don’t know if that makes me a good person or not. It just seemed like a cool thing to do.

That’s the coolest part about doing this. We are just regular guys. We get to meet people from all over, and just connect.

The Cabin: Out of interest, what’s your favourite design that you’ve printed? Why?

Tim: My favourite is the Half Evil design. Josh is a much better designer then I am and it’s the only one that I have really been able to design from front to finish. I love the look and the edginess and the subtle message. I like the rebellious side of New Lyfe and it is cool to do that.

Josh’s favourite is definitely the Against the Grain Shirt. That one isn’t released yet either but the feedback we have gotten from it has been amazing. It is such a cool idea to play off the Miller Lite logo – the words against the grain really speak for themselves.

The Cabin: I’ve been seeing many new designs come up on your Facebook page. When can we expect to see them for purchase on the site?

Tim: We are releasing all the tank tops this week. The shirts will come out probably every Friday. We are just waiting on the pictures to come back.

The Cabin: A lot of our clients come from all around the world – North America, Australia, Europe and Asia – do you ship globally?

Tim: Of course. We have a map that we put stars in all the cities we ship to. We have shipped to every country except Antarctica. We still can’t believe that.

The Cabin: Lastly, it appears that you’ve only got XXL left in the Original Gangster sweatshirt of which I personally was hoping to purchase (in a smaller size) – think you’ll be re-stocking anytime soon?

Tim: We just stocked up! Keeping up with inventory is a lot harder than we originally thought. In fact, everything about running a clothing company is harder than it looks 🙂

Like all things in life – it’s usually harder than it looks. But it also looks like they’re doing a great job – in their business and in recovery! Thanks for talking to us Tim, and congrats on everything you’re doing!

You can visit their Facebook Page to keep up-to-date with these guys, and of course see all the upcoming designs and release dates.