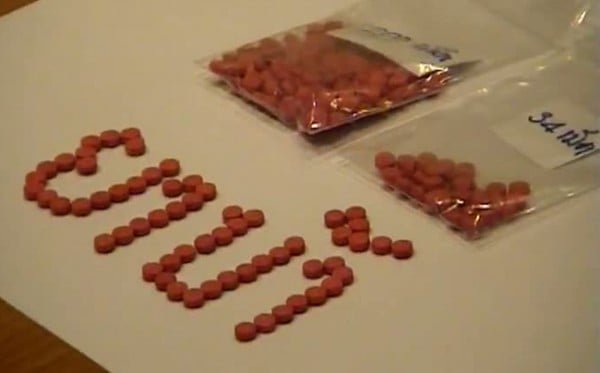 Yaba, meaning “crazy drug”, has long been the drug of choice for all levels of social class in Thailand. Easy to access and cheap to purchase, this mix of methamphetamine and caffeine will keep the user awake for long hours, even days at a time.

Many factory workers are known to use yaba to help them get through the long work day, while socialites and party-lovers use the drug to stay up late and, well, party. Last July, a popular teen television star was photographed using yaba, and the photos went viral.

However, just like any other meth-based drug, yaba is highly addictive and has taken control of many lives. Despite a major crackdown on drugs in 2003 and again in 2010, the popularity of the drug has actually increased, along with the potency. The average methamphetamine concentration varies now from the traditional average of 20% to as high as 95% for the more pure, crystalline form known as “ice”.

Most forms of yaba found in Thailand are produced within the Golden Triangle – a jungle-covered area in which Thailand, Laos and Burma share a border – and which has long been known for its role in opium production. Now, besides being the world’s second-largest opium producer (next to Afghanistan), the Triangle is pumping out one of the world’s largest supplies of meth as well. And due to the porous borders and makeshift production shacks deep in the jungles that are hard to find and can easily be abandoned, the drug trade continues to flourish.

Despite the crackdowns, by 2011, the authorities believed that 1 in 60 Thais used methamphetamines. And in the first half of 2012 alone, the public health minister estimated that 7,000 children aged 7-17 years, had been rehabilitated for methamphetamine use. In August 2013, Thai police burned 31 million methamphetamine tablets aimed at luring younger users with brightly coloured pills and chocolate, strawberry and other sugary coatings to help mask the usual bad taste of the drug.

According to a report by the UN Office on Drugs and Crime (UNODC), more than 80% of all drug addiction treatment in Thailand during 2012 was for methamphetamines, and without proper long-term treatment programs, relapses occur frequently.

In order for Thailand to see a decrease in meth use, officials must work together with neighbouring countries to crack down on the production, while creating better rehabilitation programs for those addicted, and at the same time – they must raise awareness of the negative effects of yaba – especially to the country’s youth. But with the current state of government being so unstable, it’s likely these issues won’t get the time and manpower they deserve. At least, not any time soon.

The Dangerous Effects of a Percocet Addiction