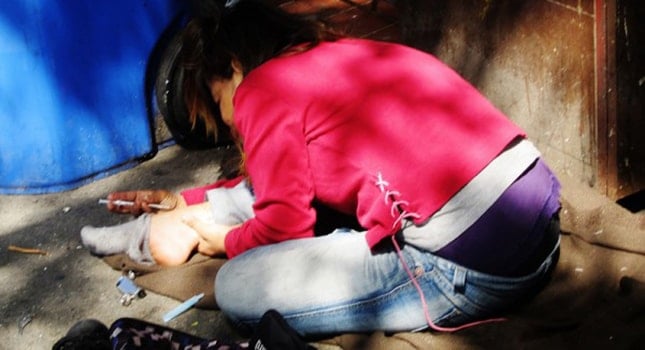 It sounds made up, but the latest drug to hit the market in Russia, known as krocadil, is as real as ever and is a growing problem that is slowly making its way onto the streets of Europe.  Krokadil made its entrance onto the Russian drug market in 2009 and since then is said to be used by at least 5% of the population. It is a deadly and highly addictive drug that is causing the few rehab centres in the country to become full and unable to help the growing number of persons needing treatment.

The name instantly makes a person think of a scaly green crocodile living in swampy waters. It is called so because it causes a user’s skin to become scaly and sometimes green because of infection. The main drug making up krokadil is desomorphine, a drug 8-10 times stronger than morphine and can be made from codeine through a chemical process.  The chemical structure of desomorphine is nearly identical to heroin making it desirable for heroin users. However, this drug can be purchased for 6-8 USD per injection, whereas heroin in Russia costs up to 150 USD per use.

There is a misconception that the desomorphine is responsible for causing krokadil users to develop the scaly infectious skin; however, it is actually due to the lack of safety and the materials during the chemical process. Many users cook krokadil in their own kitchen and use gasoline as a solvent, as well as, red phosphorous, hydrochloric acid, and iodine as reactants to synthesise the desomorphine from the codeine medication.

Within 30 minutes, a user can have a syringe full of the orange liquid ready to inject into their veins. The skin around the injection site becomes irritated and damaged which causes infection and often gangrene.  Unfortunately in many situations, the user is so focused on their addiction that they do not seek help for their infection, this causes the site to worsen and slowly the skin decays leaving the bone exposed.

In Russia, codeine is cheap and can be legally purchased without a prescription. Krokadil can be made in 30 minutes and is far cheaper than heroin; this makes the drug desirable for many.

Additionally, Russia accounts for up to 1/3 of the world’s heroin users. Most of the heroin comes from Afghanistan; with the war in that country, the drug has become more expensive on the Russian streets.  Many users cannot afford the price of heroin nor do they want to pay the staggering prices for the drug when they can purchase numerous amounts of krokadiI for the same price. In some regions of Russia, opiates, such as heroin, are no longer being used or is difficult to find, making krokadil the easy alternative for many users.

What can be done?

The amount of krokadil seized by Russian officials has increased 23 fold since its entrance in 2009. Many people in the country are calling for better efforts to get the drug off the streets and those addicted to it into treatment centres.  While the Ministry of Health made plans to make codeine a prescription only medication, it has not yet been accomplished. Many people claim that this is due to pharmaceutical companies lobbying against this purposed plan.  Viktor Ivanov, head of Russia’s Drug Control Agency, said: “…we need to introduce prescriptions […] These tablets don’t cost much but the profit margins are high. Some pharmacies make up to 25 per cent of their profits from the sale of these tablets. It’s not in the interests of pharmaceutical companies or pharmacies themselves to stop this, so the government needs to use its power to regulate their sale.” Those opposing Mr. Ivanov say that even if codeine is made available through prescription only, users will still be able to get their hands on it.

Recently, Germany and other European countries have seen a rise in users switching from heroin to krokadil. In some of these countries, such as Germany, codeine is not available as an over the counter medication, but is still being cooked into krokadil. As of now, little effort in these countries is being made to keep the drug out.

Withdrawal from krokadil is a very painful process, with physical symptoms lasting for up to, and possibly over, one month making quitting especially difficult. To add to this, Russia only has few rehab centres, and therefore lacks the professionals and treatment methods required to help those in need.  With proper care and knowledge, an individual with an addiction to krokadil can get treatment and can become sober.

The Cabin Chiang Mai is a rehabilitation centre located in the North of Thailand. Within only a few hours on a short flight from the major cities of Russia an individual struggling with an addiction to krokadil or any other drug can begin their recovery and ultimately take back their life. If you or someone you know is addicted and wants to stop, contact The Cabin Chiang Mai today.

A Call for Effective Treatment Options in Southeast Asia

Drug Abuse and Overdoses Still on the Rise in the USA

Australian Addiction Treatment Centre Shalom House Claims to be the Strictest Rehab Centre — But Does it Work?