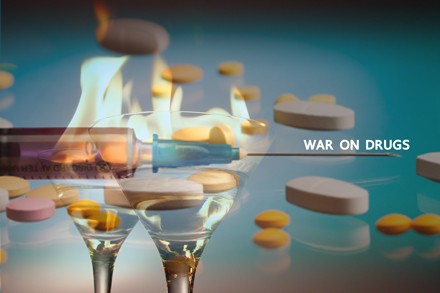 The world-wide battle against the distribution, selling and using of illegal drugs is unlikely to ever be truly won. By definition the very nature of battle is adversarial, and the final eradication of illicit drug use is only attainable through a shift in awareness amongst the populations and subcultures who participate in it.

This will take a very long time. The control addiction exerts over addicted individuals is so strong that the prospects of dire consequences such as arrest, prison or even death are seldom strong enough to curtail it. Addiction, full blown, is stronger than any controlling force, as is the motivation of the nihilistic and destructive elements in all of our societies who produce and sell drugs. Like insurgent guerilla armies they have the upper hand, they don’t have to play by the rules and they have little to lose.

Both addicts and suppliers are often from lower socio-economic groups, which are not to suggest their culpability is less, but only to highlight the compelling forces which drive addicts to medicate themselves, and criminal fraternities to make money and gain power. In the end it cannot be a battle, but has to be an evolution in society brought about by education to prevent addiction, a sophisticated psychological treatment for those already addicted and efforts to raise living standards to reduce poor living environments, which are clearly a key cause of addiction.

If governments could restrict the availability of alcohol and tobacco in the same way they do illegal drugs then many of them would probably have done so. As American prohibition demonstrated this was simply not a practical solution due to the fact that a large proportion of the population were already using them and so, when prohibitive attempts failed, the US ultimately turned instead to education. Tobacco consumption has plummeted in the US since the 1960s due mainly to long term public health campaigns and awareness raising which has changed trends and reduced the social acceptability of this drug.

A similar approach should be employed with illegal drugs. I am not suggesting that enforcement efforts should be relaxed but they also need to be accompanied by education programs. Teaching potential drug users about the dangers of drugs, or offering existing drug users assistance to stop can be just as effective a weapon in the ‘war’ on drugs as the threat of draconian prison sentences. We can significantly reduce illegal drug use just as we have done with legal drugs, through community and residential drug treatment programmes and long term public health campaigns which undermine the acceptability, trendiness and desirability of drugs.

Attempting to reduce the supply and availability of illegal drugs should not be the sole focus dictating political policy. Governments need to look at reducing the actual demand for drugs either through offering effective education to potential users or scientifically and medically proven treatment services to existing users.

A Decrease in U.K. Drug Use: Drug Rehab Programmes and an Aging Generation