March 15, 2016Michael ShannonBlog, Internet Addiction Treatment
Internet addiction on college campuses is a growing concern as more and more global studies are revealing. Find out which areas of students’ lives technology addiction is affecting in particular and why the college population is at risk. 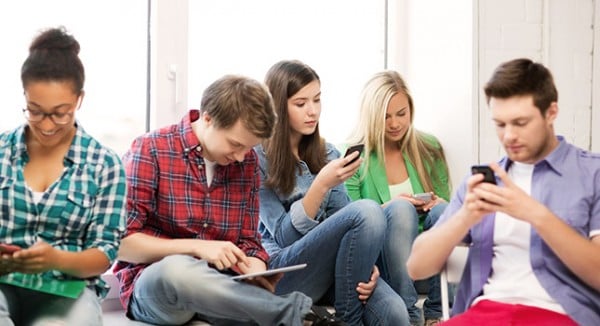 Binge drinking and substance abuse are problems that are consistently talked about on college campuses. However there is now another problem popping up that despite rarely being addressed is also negatively affecting students — internet addiction. Because internet use is such an integral part of a student’s day to day experience, problematic internet use can be easily overlooked. Like substance addictions, internet addiction affects a student’s ability to perform well academically, maintain healthy social relationships, and impairs their overall mental and physical well-being

What is Internet Addiction?

In order to understand how internet addiction on college campuses is becoming a problem,  it is first helpful to understand exactly what the disorder is. Internet addiction disorder is a broad term used to describe an individual’s inability to control and limit internet use, which interferes seriously with one’s ability to lead a healthy life. Sometimes also referred to as Problematic Internet Use Disorder or Compulsive Internet Use, the disorder can lead to serious mental health problems and is related to depression, social phobias, problems sleeping, and impaired schoolwork, work and home life. The most recent edition of the Diagnostic and Statistical Manual of Mental Disorders (DSM-V) has not yet classified internet addiction as a clinical mental health problem, but lists it as a disorder that requires further study. However, many addiction specialists find that their clients struggle with internet use, and consider this a new channel for the expression of addictive behaviour brought on by the disease of addiction. Research is just beginning to define the scope of the problem, but it can be helpful to view addiction to the internet in relation to other process addictions that have already been studied further such as gambling addiction. Process-based addictions occur when an individual becomes addicted to a particular behaviour, such as gambling, sex, or eating, as opposed to a substance. These behaviours trigger the brain’s reward system. For some people, the repeated stimulation of the reward system with certain behaviours, such as gambling or internet gaming can lead to changes in the brain and ultimately addiction. As the public becomes aware of problematic internet use, more researchers are also interested in developing a greater understanding about how problematic internet use effects people and develops into a full-blown addiction.

Addiction to the Internet is Interfering with College Students’ Relationships

One of the most recent research studies published in the United States set out to understand how students’ internet use affected their family relationships. The study participants self-reported problematic internet use, and spent at least 25 hours per week using the internet for purposes outside schoolwork. The participants also reported experiencing at least some negative consequences due to their internet use. Through focus groups researchers found that while some participants noted the internet had positive effects on their family relationships, such as allowing them to stay connected to family members while away at college, the majority of the conversations disclosed that the students’ problematic internet use caused family conflict and disconnectedness. Students reported ignoring their family members in favour of spending time on the computer and experiencing backlash from family members in relation to their internet use. The researchers concluded that students are using the internet compulsively and it is affecting their ability to foster healthy family relationships. College students can be particularly vulnerable to developing an addiction to the internet due to many factors such as the high expectation of internet use for coursework, unlimited and uncensored internet access, its use as an easily accessible and socially acceptable form of escapism from stress and pressure, and the psychological and developmental characteristics of young adulthood. When it comes to internet addiction on campus and its potential problems, the United States is certainly not the only country researching the effects of problematic internet use.  Internet overuse and addiction has become a concern of parents, faculty, and researchers at universities around the world.

Research is taking place on campuses worldwide to assess how excessive internet use may be effecting students. At Kashmir University researchers found that internet addiction, as assessed by Young’s Internet Addiction Scale, was prevalent amongst university students, and positively correlated with depression. Another Indian study in Bengaluru, the silicon valley of India, found that 34% of students experienced mild addiction and 8% moderate addiction to the internet based on Young’s scale, and the study hopes to support the inclusion of internet addiction disorder in the DSM-VI. Studies in Malaysia, China, and Taiwan also document compulsive internet use as a growing problem amongst college students. Because internet use is an expected and necessary aspect of modern college education and communication, those who struggle with problematic internet use may have difficulty reaching out and receiving help to counter the negative effects they are experiencing.

How is Technology Addiction Treated?

While internet addiction is still in the early stages of research, there are treatment options available. Internet addiction treatment shares similarities with the treatment of other process-based addictions such as gambling addiction. Currently the treatment approach with the most empirical support and acceptance in the field is cognitive behavioural therapy (CBT). CBT helps clients suffering from addiction change their thinking patterns and gain the skills necessary to sustain addiction recovery. At The Cabin, in conjunction with CBT, we also use a treatment model called Recovery Zones. This model is particularly effective for addictions — such as internet addiction — where complete abstinence is not realistic. It is hard to imagine working and functioning in the modern world without accessing the internet or using computers at all. Thus, with Recovery Zones methodology clients can define a recovery baseline that includes the exact problematic behaviours that would need to be abstained from. The programme works by dividing the addictive behaviour into three ‘zones’, active, slippery, and recovery. For each person these zones will look different. For example, for someone whose internet addiction is based around gaming, visiting gaming websites may fall into the slippery zone — an activity that will likely lead back to the full blown addiction if not dealt with right away. This approach is simple and holistic, because whilst still being a 12 step abstinence-based model it is much less ‘religious’ sounding than the traditional 12 Steps. The 12 Steps may be harder to relate to for young people and non-Westerners — which many internet addicts are. Recovery Zones offer a different format — and blends extremely well with the CBT and Mindfulness Meditation that we use here at The Cabin. If your or a loved one’s internet or smartphone use seems to be causing significant problems with life, feel free to consult one of our experienced internet addiction experts on the best way to handle this issue.