Heroin Withdrawal: Symptoms and Options for an Addict 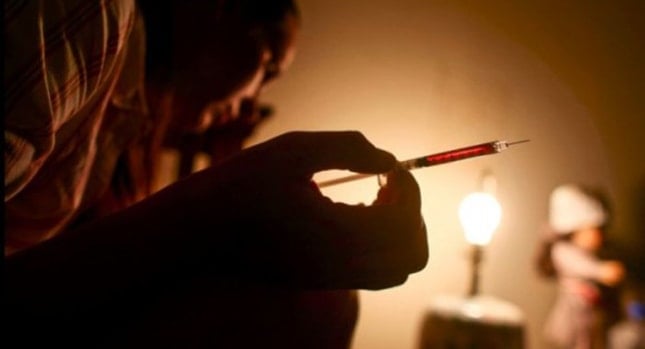 Heroin is a highly addictive opiate drug. The effects can be almost instantaneous and addiction to the drug can be very quick to follow. Despite any dangers associated with use, it is very difficult for a person to quit. One of the biggest reasons is because there are severe withdrawal symptoms when quitting heroin.

Heroin is a highly addictive opiate drug. The effects can be almost instantaneous and addiction to the drug can be very quick to follow. Despite any dangers associated with use, it is very difficult for a person to quit. One of the biggest reasons is because there are severe withdrawal symptoms when quitting heroin.

A Person with a Tolerance can Have Withdrawal Symptoms

When a person uses heroin on a continual basis, they will begin to develop a tolerance. Tolerance means that the body has become used to the presence of the drug and requires more to feel the same effects. Eventually the body becomes dependent on the drug. Once a tolerance has developed to heroin, it becomes extremely difficult to break away from regular use. Even when the tolerance begins a user will most likely go through withdrawal when quitting. Even if a person uses heroin for as little as 2 weeks on a daily basis, they can go through withdrawal.

When a person begins having withdrawal symptoms, it means that their body is reacting to the drug being absent. The person’s body is letting them know that it wants more of the heroin. Withdrawal symptoms can begin within a few hours of the last dose. The person will first experience severe cravings for the drug; oftentimes, because of the intensity of the cravings most addicts will use again.

Some Symptoms can be Hard to Overcome

Some symptoms of heroin withdrawal can make the experience very hard on the addict; such as, muscle aches, sweating, anxiety, abdominal cramps, cold flashes, vomiting, and diarrhea. Some addicts after they make it a day or so will dose up again if given the chance. This is why when any addict comes off heroin it should be under the care of medical professionals.

Many heroin addicts will also experience ‘Itchy Blood’. Itchy blood is a painful condition that causes compulsive scratching, resulting in severe bruising and skin ruptures that leave scabs. Some of these scabs can get infected, and if left untreated, they can cause serious medical problems. When a heroin addict abruptly quits they may also experience ‘restless leg syndrome’ or ‘nervous legs’. This is an uncontrollable twitching in the legs.

The Intensity will Vary

The intensity of heroin withdrawal symptoms will vary from user to user and will depend on how much, how long, and how often they used. Symptoms will begin within a few hours after the last dose, will reach their peak at around 24 to 48 hours and will start easing around 72 hours. Some users do report symptoms lasting for up to a week. Although all of these withdrawal symptoms can be very painful for a heroin addict, most report that it was well worth it, to overcome their addiction.

Withdrawal can vary from person to person. Some people claim that it is like a bad case of the flu. While others feel like they are at deaths door. Psychologists state that while there are physical symptoms of heroin withdrawal, more of the withdrawal has to do with the psychological addiction.

During heroin withdrawal, many addicts feel extremely depressed or have severe anxiety. These feelings can be so overwhelming that is makes them think they are going to die and not be able to make it through the withdrawal process. If the addict is at a rehab or in detox, professionals can help the person to get through it. A heroin addict can experience cravings, months and even years after getting clean.

Withdrawal from heroin and any other opiate is a painful process, but the user’s chances of dying are extremely low. Withdrawal from benzodiazepines, barbiturates, and alcohol has much greater chances of complications and death. However, there are instances when a heroin addict going through withdrawal may take benzodiazepines, barbiturates, or alcohol to try and lessen the severity of the symptoms. Taking too much of these substances too fast to ease the pain can cause an overdose and death.

Some heroin addicts choose to go through a rapid detox. This is when they will enter a medical facility and be administered medications that quickly eliminate the heroin from the body. These medications are called opioid antagonists and are known as Naloxone or Naltrexone. They are also useful in immediately reversing a heroin overdose. The point of the rapid detox is to try to eliminate as much of the withdrawal period as possible. The addict is put to sleep and is given the medication, about 8 hours later they wake up and the heroin is out of their body. Studies have shown that the withdrawal symptoms can be lessened this way, but an addict must still go to treatment for long term success.

Methadone is a type of opioid and may be given to heroin addicts to ease their physical withdrawal symptoms. Methadone is slowly absorbed into the gastrointestinal tract and lasts for up to 24 hours. Studies have shown that supervised methadone substitution treatment is very successful for treating heroin addicts. Methadone is recommended for addicts who have relapsed during withdrawal.

Methadone is very controversial; because it can become addicting. Most treatment centers will gradually wean a person off of methadone. People coming off of methadone can also experience withdrawal symptoms that may last for up to one month.

Buprenorphine is a recently new medication for heroin addicts. It has proven to be very effective for heroin withdrawal. It is also an opioid, but unlike heroin and methadone, the person is less likely to develop a dependence or an addiction. It is given to a person every 24-48 hours. When a person stops taking buprenorphine, they will have very little or even no withdrawal.

Throughout withdrawal, having a friend or loved one be there to support any addict is invaluable. For a person who has an addiction to heroin they should seek treatment at a rehab to recover. Treatment can provide them with professional staff that will show them how to live and maintain a sober life.

Every heroin addict is different. Each addict will have different withdrawal symptoms and react differently to the techniques being used. What may help one may not help the other. Getting into a residential treatment program can help find out which technique is best for the individual. Heroin addiction can be treated and a person can go on to live a healthy, happy, successful, and drug free life. Contact The Cabin Chiang Mai today if you or anyone you know is suffering from heroin addiction.

How Not To Stray From Your Alcohol Recovery During the Holidays

Treatment at a Drug and Alcohol Addiction Rehab in Asia