May 6, 2019GemmaBlog, Drug Addiction, Prescription Drugs Addiction Treatment, Reach, Recovery
Marshall Bruce Mathers, better known as Eminem, is 11 years sober – and proud of it. The prolific rapper posted a photo of his 11-year chip on his Instagram and Twitter accounts with the caption “11 years – still not afraid,” a brief but apt description of the bravery, hope and optimism inherent in the recovery journey. 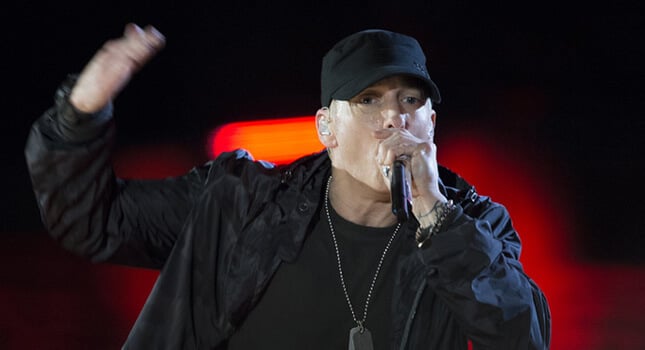 Mathers’ prior drug use was no private matter – songs like “Drug Ballad” and “These Drugs” punctuated a body of work so substance-inspired that a Project Know survey of Rap Genius archives found that Eminem made the most drug references in hip hop. He discussed his issues with pill addiction openly in a 2009 interview with Vibe magazine: “It’s no secret I had a drug problem. If I was to give you a number of Vicodin I would actually take in a day? Anywhere between 10 to 20. Valium, Ambien, the numbers got so high I don’t even know what I was taking.”

The Ups and Downs of Eminem’s Recovery Journey

After many tumultuous years of trauma- and anger-fuelled active use that included multiple stints in rehab and a methadone overdose, Eminem got serious about sobriety when he checked himself into a residential 12-Step programme in April of 2008. The rapper now sings a different tune – his albums Relapse and Recovery deal with themes of addiction and his journey away from it. And he’s just as outspoken about his sobriety as he was about his drug use. In an interview with Zane Lowe of the UK’s Radio 1, Mathers acknowledged the harsh realities of addiction that many loved ones live with each day and expressed his gratitude for the life his sobriety has allowed him to live: “I know there’s so many addicts in this world and people who had problems like that that don’t make it. So I’m thankful for that.”

Mathers’ battle with prescription drug addiction is certainly not an isolated one – the issue is vast, and growing. The opioid epidemic has seized attention worldwide for the urgency of its rapid spread and the tragic number of lives it’s claimed. According to the American Society of Addiction Medicine, prescription pain relievers were the cause of 20,100 overdose deaths in the US in 2015 alone. Perhaps even more frightening is the close relationship between prescription opioid addiction and street heroin use – it’s estimated that 23 per cent of heroin users develop a narcotic painkiller addiction, and nearly 80 per cent of heroin users report using prescription opioids first. Opioids are known for being extremely addictive, which makes their widespread use extra concerning. According to the World Health Organisation, “Opioids have the potential to cause substance dependence that is characterized by a strong desire to take opioids, impaired control over opioid use, persistent opioid use despite harmful consequences, a higher priority given to opioid use than to other activities and obligations, increased tolerance, and a physical withdrawal reaction when opioids are discontinued.” Worldwide, about 34 million people use opioids (synthetic opiates such as oxycodone, hydrocodone and fentanyl) and 19 million use opiates (opium poppy derivatives like heroin and morphine). That represents a lot of addiction potential. Who is Most Affected by Prescription Drug Addiction

While drug epidemics have historically had the greatest impacts on demographics normally disproportionately affected by societal issues, perhaps what’s most unique about the opioid epidemic is who it primarily affects. While investigating illicit drug addiction, researchers started to notice an uptick in opioid addiction among the middle class. Says Dr Andrew Kolodny, a public health expert on drug dependency at New York City’s health department in the early 2000s, “It was while we were working on the illicit drugs problem that we noticed drug overdose deaths were increasing in middle-class communities in the New York City area.” In the US, most opioid users are white non-Hispanics. While pre-Purdue-Pharma-era opioid prescriptions were generally only given to people with pain due resulting from major surgeries or traumatic injuries, today they’re handed out like candy. In fact, opioids are so overprescribed that most people don’t use their entire prescription, leaving countless unused painkillers in household medicine cabinets – where most adolescents first experiment with prescription drugs. All that increased prescribing, unsurprisingly, leads to more addiction: “Sometimes I used up my supply of prescribed medicines too quickly and went into withdrawal, until I received my next prescription,” says Dan Schoepf, a pain patient who received his first opioid prescription for a back injury. “When I ran out, I couldn’t talk to anyone [because] I was so sick. I couldn’t live with the drugs, I couldn’t live without them and I was destroying my family.”

Prescription drug abuse, like all addictions, usually stems from an underlying psychological issue. Many people – some without even realising it – use these numbing substances to self-medicate issues like anxiety and depression. Over time, use of prescription drugs like opioids significantly alters brain chemistry, making them very difficult to quit. According to a study published in the US National Institutes of Health’s National Library of Medicine, “Opioid tolerance, dependence, and addiction are all manifestations of brain changes resulting from chronic opioid abuse.” Environmental factors like lifestyle issues, stress and genetic predisposition can also contribute to the tendency for prescription drug use to escalate into an addiction.

Because addiction changes the way your brain functions, you become physically and psychologically adjusted to the presence of drugs over time. If you’ve been abusing prescription drugs for a while, or in high doses, chances are you’ve developed a dependency – and quitting on your own is not only difficult, but dangerous. The Cabin offers safe, medically supervised detox in a comfortable setting, overseen by a caring team of addiction-specialised professionals. We also offer targeted and comprehensive programming that includes individual and group CBT counselling, mindfulness therapy and 12-Step structural support to help you sustain your recovery for life. And we now offer a specialised programme just for men – Reach – which takes place in a therapeutic community village of other men with shared experiences. Talk to us today to learn more about how we can help you get sustainably sober.