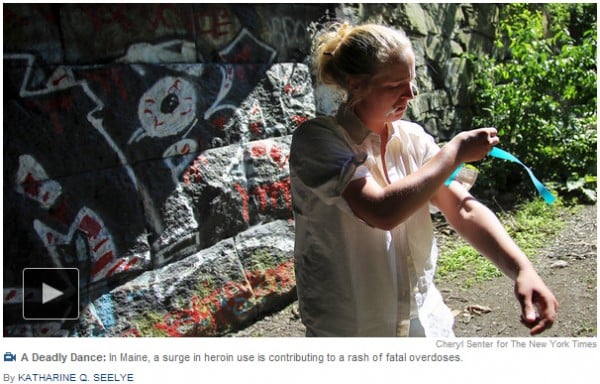 The title of an article published last month on the New York Times reads more like the title of a horror novel than one fit for local news: “Heroin in New England, More Abundant and Deadly”.

As the opening paragraphs of the article detail, despite the charming scenery that define sea-side states like Maine, small towns in the northeast U.S. are experiencing an epidemic of heroin abuse, and drug addiction treatment cannot keep pace:

“From quaint fishing villages on the Maine coast to the interior or the Great North Woods extending across Maine, New Hampshire and Vermont, officials report a sharp rise in the availability of the crystalline powder and in overdoses and deaths attributed to it,” writes Katharine Q. Seelye in the New York Times.

In the wake of greater oversight of doctors who prescribe painkillers, heroin has become cheaper and easier to get. Plus, the farther away from the urban centre you get (and the deeper you drive into small towns), the more dealers feel comfortable collecting more money; profit margins increase, the level of drug abuse rises and drug recovery stumbles to keep up.

This New York Times article follows a 23-year-old woman addicted to heroin. The intensity with which her mind is focused on getting to the next high is terrifying, so much so that her two children were taken from her a year ago, and she has resorted to prostitution to afford her habit; plus, there is no talk of drug addiction treatment in her future.

“Her only concern now is scoring more heroin,” writes Seelye. “She pays no attention to food and sleeps where she is or in a shelter.”

The dilemma this article raises is how to get drug addiction treatment centres into small towns in places like Maine and New Hampshire that until now didn’t show a need for it. The New York Times article writes about posters that line parts of Portland, Maine; they read: “’Please Do Not Use Alone. Do a Tester Shot’” and “’Use the Recovery Position’”.

These signs, aimed at making sure that drug abusers don’t overdose, demonstrate that the focus is not on drug addiction treatment. It is on keeping those addicted to drugs out of the number of drug-related deaths reported per year.

The question is not how we can save a life, but how can we make it a healthy and productive one as well.