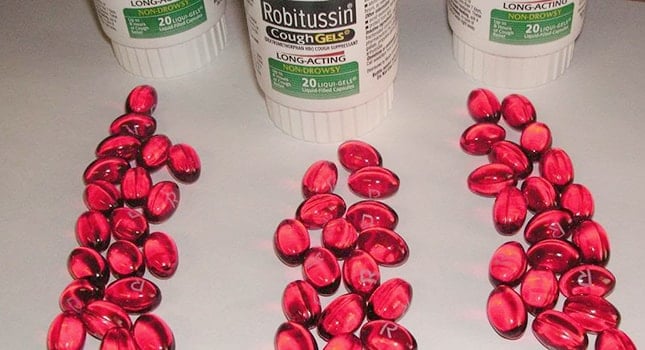 Dextromethorphan or DXM is one of the main ingredients found in over 120 over the counter medications, particularly, cough syrups. It is a synthetically made substance that is related to codeine, but without the sedating or analgesic side effects. Dextromethorphan has been widely abused for many years; however, the past decade has seen an alarming increase in users. According to medical professionals, abusers of dextromethorphan, or DXM, are typically under the age of 25. Although DXM is safe for moderate medical use, it can be harmful when it is abused, and can cause those over indulging in this OTC medication to develop an addiction.

There are several street terms for dextromethorphan, and they will vary by country; however, the most common terms that are used on the street include: robo, robo tripping, dex, triple C, or skittles.

A dextromethorphan abuser will drink entire bottles, or swallow as many pills, of the OTC medication as quickly as they can without vomiting. The effects of DXM will depend on the user’s size, how much they have ingested, and how much of a tolerance they have to the drug.

In general low doses of DXM causes the abuser to have mild stimulant like feelings, at slightly higher doses, the abuser may experience euphoria and hallucinations, and with a greater amount the abuser may have distorted vision, loss of motor function and an ‘out of body’ experience.

In general, at 100 to 200 mg, DXM is a mild stimulant. At 200 to 400 mg, the user may experience euphoria and hallucinations; at 300 to 600 mg, distorted vision and loss of motor control; and at 500 to 600 mg, a dissociative (out-of-body) reaction may occur. When taken orally dextromethorphan takes up to 30 min to take effect; however, many heavy abusers choose to inject it as the effects are much quicker. These feelings can last up to six hours.

There are many side effects that can be attributed to dextromethorphan abuse. These include:

Many users will experience extreme nausea and vomiting when taking DXM in medium to high doses. Extreme vomiting could potentially cause the abuser to choke which may lead to death.

Studies show that between 5 and 10 percent of Caucasians do not metabolize dextromethorphan properly. This puts these people are risk for even greater risks if they take any dose above the medically recommended 15 to 30 mg.

Even at prescribed doses, DXM causes drowsiness and dizziness; higher doses will add to these effects, thus users should never drive or operate machinery when on this medication.

Additionally dextromethorphan abusers may experience panic, dysphoria, psychosis, paranoia, convulsions, and overdose; which can lead to a coma and death.

Most medications containing DXM also contain other drugs; such as, acetaminophen, ibuprofen .anti-histamines, guaifenesin, phenylpropanolamine, alcohol, chloroform, and non-narcotic opiates. This makes abusing OTC medications extremely dangerous because abusers are not only taking DXM at high doses, but also these other potentially harmful ingredients. It is rather common for abusers to experience very unpleasant effects or overdose on these DXM medications that include other drugs.

Additionally high doses of acetaminophen can permanently damage the liver, Phenylpropanolamine decreases swelling in nose and ears. At high doses, it can cause hallucinations, dizziness, faintness, changes in heartbeat, seizures and slow breathing.

As abusers tend to take large amounts of syrup or pills, that have other ingredients mixed in, for days or months at a time, they are putting themselves at high risk for developing permanent liver damage, damage to bone marrow and nerve cells, cardiovascular toxicity, and high blood pressure. There have been many individuals that have suffered permanent brain damage or have died because they abused dextromethorphan.

Unfortunately, there has not been enough scientific research to determine the long term effects of dextromethorphan abuse. However, there have been many cases that have provided evidence on the damaging effects of DXM abuse.

Deadly Effects of the ’Party Drug’ Molly: Hollywood Should be Ashamed

How Marijuana Smokers Get Hooked