April 25, 2016Michael ShannonAlcohol Addiction Treatment, Blog
Children who grow up with an alcoholic parent can suffer many devastating lifelong consequences. Calum Best, son of legendary Manchester United footballer George Best, has written a book about the impact of living with an alcoholic father, in hopes of reaching out and giving a voice to the children of alcoholics. 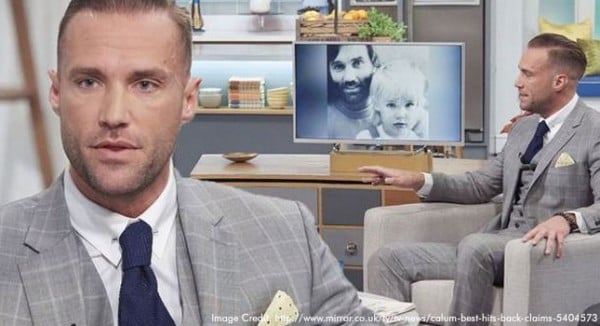 Within the families of people addicted to alcohol (or other drugs), the needs of the addicted person often take the spotlight; their addiction related problems become a family priority. This can leave the children of alcoholics feeling lost and alone, as they struggle with the familial impacts of alcoholism–how they trickle-down from the parent to the child. The son of all-time-favourite Manchester United and North Ireland footballer George Best, Calum Best — who is a model, reality TV personality and now a patron of the National Association for Children of Alcoholics in the UK — talks about this in his recently released autobiography. A book that delves into his relationship, or lack of,  with his alcoholic father, who died in 2005 of alcohol related complications. Calum’s book, Second Best: My Dad and Me, is aiming to reach out to children of alcoholics and give a voice to their plight.

Second Best: My Dad and Me

In Second Best: My Dad and Me, Calum chronicles how his father’s alcohol dependence ruined the relationship between him and his father. He shares how the physical and emotional absence of his father contributed to his despair and desperate longing for a real relationship with him. Calum reveals the ups and downs of his experiences and how he felt that he had nowhere to turn to in the midst of his anger, confusion, and embarrassment. In one segment of the book, Calum talks about his father’s miraculous second chance at life after receiving a liver transplant in 2002. For a moment, Calum was filled with hope to begin building the relationship he had always dreamed of having with his father. However, his hope was shattered when his father began drinking again and did so until his death in 2005. The dichotomy of intense love and adoration for a parent and the never-ending confusion, betrayal, and hurt that a parent’s alcohol addiction can cause others is apparent in Calum’s account of his relationship with his dad — a feeling that is commonly experienced by the children of alcoholics. Unfortunately, despite seeing the damaging effects of alcohol dependence on their parents, children of alcoholics are themselves more likely to drink. For example, Calum is aware that alcoholic tendencies are within him as well and has admittedly struggled with his own bouts of alcohol abuse.

How Alcoholic Parents Affect Their Children

From learning codependent relationship patterns to experiencing abuse and neglect, a parent’s alcohol dependence will most definitely have an effect on their children. While every family’s situation is different, there are some common patterns that occur within alcoholic families:

The children of alcoholics are more likely to experience emotional or physical neglect and other forms of abuse. In worst-case scenarios, this mistreatment is severe. However, for many, the emotional neglect that occurs when a parent is drinking is less obvious. In Calum’s case, the emotional and physical absence of his father had profound effects on him, despite being cared for financially.

Loving someone with an addiction leads to inevitable let-downs, especially when that person does not keep to his or her word. For the children of alcoholics, these constant disappointments can lead to lifelong issues associated with trusting other people. Parental inconsistency also leaves children feeling confused about what is right and wrong behaviour.

The chaos that often surrounds living with an alcoholic parent can leave children suffering from emotional and behavioural problems, as they try to manage their unpredictable situations. Children may experience feelings of anger, shame, guilt and confusion. They also may not know where to turn for help or how to effectively cope with their emotions and overall situation. This can lead to emotional disorders and many other problems that extend into adulthood.

Co-dependency refers to a set of unhealthy relationship patterns that can follow children into adulthood and lead to problems with intimacy and forming healthy, fulfilling, relationships with others. Taking on roles of co-dependency within the family is also a common outcome within families of addicted people.

The children of alcoholics are more likely to develop alcohol or other substance or process addictions. They may turn to alcohol and drug abuse as a way to cope with their failed family relationships and emotional instability, which coupled with a strong genetic risk factor, can further perpetuate the family cycle of addiction.

Help and support for children of alcoholics

Despite often feeling alone, as more attention is being brought to the unique and profound struggles that children of alcoholics face, more help is becoming available. 12-Step support groups such as fam-anon and al-anon teen for example offer help and hope to people living with an alcoholic. There are also groups for adult children of alcoholics that focus on personal recovery from issues such as co-dependency stemming from growing up with an addicted parent. The National Association for Children of Alcoholics (NACoA) is another great resource that provides information and support in America, Canada, and the UK. On his own page of the Nacoa UK website, Calum Best says: “It’s so important for me to be a Nacoa patron. If I’d known there was someone I could talk to or even someone to listen it would have helped me understand and cope with my dad’s illness. I hope kids and young people feel that they can ask me for help and see that things can be different if you talk about it.” If you are a parent struggling with addiction (or know someone in this situation), it is impacting your children no matter how hard you try to protect them. Contact one of addiction specialists to get yourself and your family on the journey toward addiction recovery.