From Addiction to Triathlon: The Cabin Sober House Residents Compete in the 2016 Laguna Phuket Triathlon

We sat down with three Cabin Sober House residents to talk about their participation in the 2016 Laguna Phuket Triathlon and what it meant to their addiction recovery.  The event was a culmination of hard work that pushed them to their limits, brought them together and surpassed their expectations. 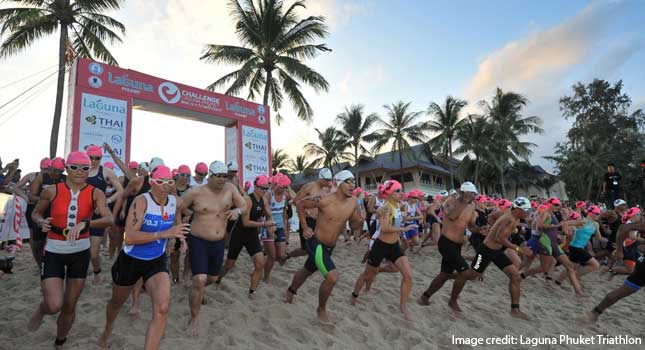 The Laguna Phuket Triathlon was held November 20 on northern Phuket Island.  The consisted of a 1.8K swim through the ocean and lagoon; 50K cycle through Phuket’s tropical landscape of beaches, hills, temples, villages and pineapple fields; and 12K run through the Laguna Phuket resort complex.

We chatted with three triathletes from The Cabin’s Sober House – Sam (28, from Sydney), Chris (34, from Sydney) and James (41, from the UK) – about their experience in the triathlon and the recovery journey that led them there.

Sam: Exciting.  It was good bonding with the boys; I was able to overcome (challenges) using mind over matter.  It reminded me of school – the excitement of knowing there’s an event coming up the next day.

Chris: I played water polo before, and part of what made me decide to get clean is because I had done a lot of cocaine before a game and I thought I was going to have a heart attack in the pool.  After that, swimming 1.8K felt like a huge accomplishment.  The camaraderie felt good, I really enjoyed it.  I loved it.  I was taking photos and cheering like a team mum.  As soon as we were done, we were all looking into when the next triathlon is.  My brother is coming out to do the next one with me.

James: I was in the programme when we first started training.  I was in primary treatment for three months and I’ve been in Sober House for seven months, so it was a big build-up.  I had a high-level corporate job along with drug use for the last 20 years.  My idea of exercise was having a gym membership and going to the sauna.  Beforehand, I had a lot of self-doubt.  I was really nervous, and I got really anxious before the event.  I did the full event.  Once I swam the first 200 meters, it felt great.  My mom and sister flew from England to support me, which was really beautiful.

What was the most challenging part?

Chris:  It was intimidating looking at how far out the ship (the marker for the ocean swim) was.

Sam:  It was the first time I had run 12K and I had only been training for four weeks.  I had always thought that with running, when your mind tells you to stop, you just stop.  I had Ali (The Cabin’s programme director Alistair Mordey) next to me on the run and he just kept telling me, “Don’t stop, don’t stop.”  I pushed myself past my boundaries, past my limits.

Chris:  We all had lunch afterwards and everyone was on that high, talking, sharing war stories about where we were six months ago, 12 months ago.

Sam:  Some of us should be dead or in jail, and four months later we’re running 12K.

Chris:  I used a lot to not feel anything.  I did a lot of escapism with my using.  My experiences from week five to week 10 were about digging deeper, going to the core and exploring my childhood development.  I learned a lot about myself.  It’s the best thing for me that I went to rehab.  I tried everything I could to quit drugs before going to rehab. Moving abroad, trying to quit drinking, moving back home – nothing worked.

Before, I could never sit for five minutes and listen to someone talk.  When Ali gave us a lecture on ‘What is Addiction’ it blew my mind – it was like listening to someone describe me in a lecture.  He showed me, me.  It really opened up my eyes to how addiction works.

Chris:  The family programme was great because my family had no idea (how addiction works).  It really helped.  It gave us a bridge to converse.  (After coming to The Cabin) they understood addiction and what I was going through.  I didn’t think I needed rehab.  For the first few weeks I thought I was in the wrong place and kept looking for differences rather than similarities.  I’m on better terms with my family now – it’s like night and day.

James:  My mom, dad and sister came for the family programme. (Learning about addiction) is like learning a new language.  Now they understand what addiction is, and they get the fellowship of meeting other parents who have gone through the same thing so they don’t feel alone.

Sam:  My parents were shocked by how much there is to learn about addiction.

What brought you to The Cabin?

Sam:  I chose The Cabin Edge because of the physical side of it; I was very physical before my addiction.  I had been unsuccessful at other rehabs before, but I was willing to come this time.  Before I came here, I knew I needed to.  I was broken.  I told my family members I couldn’t go a day without (my drug of choice).  This program opened up my eyes that I have addiction.  I have behavioural issues that I need to address to stay clean.  I need to be honest in every aspect of my life in order not to hand the power back over to drugs.

Chris:   It sounds really melodramatic, but I had come to the realization that I was going to die.  My mom used to be up at night crying, and that came with a lot of stress.  She was holding onto a lot of things.

What are your plans after this?

Chris:  I will be staying at Sober House at least until February.  I like to exercise when I have a goal.  It gives me something to work towards.

Sam:  I plan on staying involved in The Cabin Edge on a voluntary basis.

Thank you for the opportunity.

You are capable than more than you know.  If you are struggling with addiction, contact the experts at The Cabin Chiang Mai today to see how we can help you get your life back on track.

Perfect Gifts for an Addict or Recovering Addict

How to Build a Strong Support Network

Out of Rehab: 5 Personal Growth Strategies to Keep You on a Sober Path