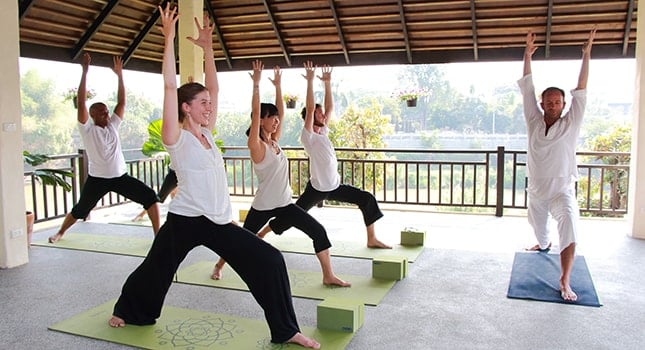 Business Insider talks to veteran Ben King as he discusses his struggle with addiction, the confusion behind his own war and peace and how mindfulness changed his life…

If you’ve seen the movie, “Act of Valor,” you will remember the scene on the beach before the SEAL team leaves for action.

They are gathered with their families, having a few moments of peace before deploying.

During this down time, the team leader reminds his men to square away their home life, bills, family, cars, etc., so that when they are down range nothing will distract them from their mission. It’s pretty easy to understand why he is doing this. Down range the potential for death is front and center. A clear head could mean the difference between life and death.

Life or death; is there any clearer motivation? Down range this reality is made more clear by the fact that your failure could mean the death of your battle buddy, which is even more motivation to keep a clear head.

We know how bad the suicide rate is for veterans. How many of us are suffering from Post Traumatic Stress. The latest news points to a surge in alcohol and substance abuse.

Now there is a lot that goes into this. Historically, heavy drinking and being a warrior go hand-in-hand. When I read the article about binge drinking I laughed when I saw how they classify binge drinking: five or more drinks in one sitting. Not that long ago, at least five drinks a night was the norm for me.

For me the booze took the edge off. Not sleeping for years created quite an edge and for several years I used booze and Tylenol PM to fall asleep and sometimes that didn’t even work. Those were not good times.

Now I knew that this wasn’t good for me, but I took a lot of pride in the fact that I could drink before bed and wake up at 0400 and work all day.

When my buddies wanted to party … bring it. Manly stuff, HOOAH? Well, I am proud to say that I’m two months into sleeping without using anything! I stopped smoking a while back, but I still held onto the booze because I thought I needed it. Well in the past two weeks I’ve had a grand total of 3 drinks. I’ve even gone two Saturdays in a row without drinking anything. It feels good … but it also feels really friggin strange.

My old self—the guy I thought I understood down range—doesn’t recognize this new me. Like I said, it’s strange, but fortunately the tools I’ve used to deal with drinking, smoking, and ultimately sleeping are still useful. As most of you following this blog know, my main tool for transition is mindfulness. What you may not know is how big this simple tool is becoming.

Last night I went to a talk about mindfulness given by Congressmen Tim Ryan. He is from Ohio’s 17th district and serves on the House Armed Services committee. Big guy, went to college on a football scholarship, Irish, and cursed a few times when I talked to him afterwards. Not the kind of guy you would imagine meditating. I liked him immensely. In his book called A Mindful Nation, he talks about the many ways mindfulness should be and currently is being used to help military personnel be more resilient and veterans with transition.

What exactly is mindfulness?

“Mindfulness means being relaxed and aware of what’s going on in our own minds. It means calmly paying attention to what we are doing, without being pulled into regrets about the past or fantasies of the future. It’s our capacity to fully focus on what we are doing. This innate human ability is the essence of composure and the source of high performance. We often let our presence of mind deteriorate and fall into patterns that are not healthy for ourselves or those around us, but we can always regain our mindfulness in a moment.”

Now think back to what that SEAL Team leader told his men. He needed them present and focused. Nothing but their best would keep them all alive.

Why do I bring this back up again? In the military, we have already been conditioned for mindfulness. We understand why being fully in the fight is necessary, our problem is—my problem was—that I had no idea how to apply what I thought was strictly a matter of military situational awareness to a civilian life style.

So how did a mindfulness practice help me stop smoking, drink less, and fall asleep at night?

“It means calmly paying attention to what we are doing, without being pulled into regrets about the past or fantasies of the future.”

For me, sleep became a worry because of my past problems; booze and smoking dulled those fears. You see I was always thinking about the past:

Or dreading my future:

As I got a hold on these past and future thoughts, my fear of sleep subsided and that led to a diminished need for smoking and alcohol.

I still feel a bit unaccustomed to the new me, but now, when I catch myself worrying about something from my past or something in my future I come back to the moment.

First 90 Days of Recovery for an Addict

Drug Recovery: The Struggle Before the Release