February 23, 2016Michael ShannonBlog
Some describe ayahuasca as a powerful addiction treatment while others warn of its frightening and dangerous effects. 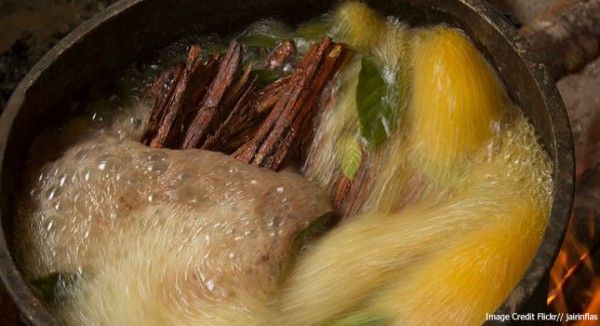 People are travelling from all over the world to the Amazon jungle in South America to use the psychoactive plant ayahuasca — mainly in bustling Iquitos, Peru where tourists flock to lodges promising to expand their spiritual and psychological horizons through drinking the plant. In addition, there are now also claims that ayahuasca can help cure people from addiction and other chronic disorders — claims that deserve a closer look.

Ayahuasca is a psychoactive brew or tea made from Banisteriopsis caapi, a vine containing monoamine oxidase inhibitors (MAOIs), along with Psychotria viridis or other plants containing the psychedelic compound dimethyltryptamine (DMT). The plant mixture induces an altered state of consciousness that can be accompanied by intense visual, auditory, and emotional effects as well as purging in the form of vomiting or diarrhoea. The plant has been used in traditional spiritual medicine ceremonies by indigenous people of the Amazonian Peru for centuries. The brew is generally made and administered by shamans, and most believe it should not be taken unless in the presence of one or more well-trained shamans. It is thought that the intense experience while under the influence of the drug can facilitate psychological growth by bringing the unconscious depths of the mind to the surface. Purging is also associated with the release of years of negative energy and built up toxins in the body. The non-traditional use of ayahuasca began in the late 20th and early 21st centuries when tourism increased in the Amazon.  This sparked scientific interest in its potential therapeutic uses as well as further exploration of the effects of ayahuasca on the brain. The psychedelic experience along with guidance by shamans has been noted by many advocates as life changing. The current popular claim is that the drug can actually be used to cure people of their substance abuse and addiction problems.

Can Ayahuasca be used as an Effective Addiction Treatment?

Anecdotal and observational research, which can at best be described as preliminary, has suggested ayahuasca-assisted therapy could have positive effects in the treatment of substance abuse disorders. However, claims that ayahuasca can be used to cure drug addiction should be taken cautiously. In two Brazilian churches small studies have documented improvements among members who were substance dependent. The addicted individuals who participated in the studies self-reported that taking part in the churches’ rituals had a direct effect on their recovery. However, these studies include only subjects who are committed members of their respective religious communities, so it remains unclear whether being a part of a spiritual community or taking ayahuasca itself contributed to fewer reported substance abuse problems. Another preliminary study found that participants in a four day ayahuasca-assisted therapeutic retreat sustained improvements in the severity of substance abuse problems and showed an increase in quality of life at a six month follow up. Again, there was no control group in this study which makes it impossible to determine whether the psychoactive tea itself or simply being a part of a spiritual retreat contributed to the noted improvements. Documentation of complete abstinence and full long-term addiction recovery after using the drug is rare and limited to single-person testimonials. The lack of solid scientific evidence has not stopped people from claiming therapeutic benefits and attempting to use ayahuasca rituals as addiction treatment. However, there are significant physiological and psychological risks involved in taking this route.

Along with testimonials of the healing benefits of the drug there are also stories of the plant’s dark side, where people have had far from positive experiences with the drug. Psychologist Stephen Trichter acknowledges the drug’s potential to facilitate spiritual or psychological growth, but cautions about the risks involved. Trichter notes that some people, especially those with mental health disorders, should be wary of taking the drug as it can cause intense emotional flooding of past traumas. And for those who are already emotionally vulnerable, the experience could do more harm than good. The effects of the drug can even be terrifying, and especially if taken with unskilled shamans this can lead to adverse consequences and psychological stress. With an increase in ‘psychedelic pilgrims’ seeking out the experience, more and more people are posing as shamans and administering the potent mixture in unsafe and non-therapeutic settings. This poses many dangers and has led to deaths, rape, and abuse by predatory and inept shamans. One serious danger is the use of the toxic plant toé, also known as brugmansia, or angel’s trumpet. This plant is known for its hallucinogenic powers, and irresponsible shamans add it to the ayahuasca mixture to increase its potency. One of the purported benefits of using ayahuasca is that it is relatively safe and non-habit forming. However, toé is a dangerous and toxic plant and miscalculating the dose can lead to permanent mental damage and death. When it comes to treating addiction, the risks of trying ayahuasca coupled with the practically non-existent scientific research supporting this type of therapy, suggests that this method may not be the best choice.

Things to Consider when Choosing the Right Alcohol or Drug Rehab

Choosing the right type of treatment for your addiction can be a daunting task. It is always best to weigh the risks and benefits of any potential treatment before beginning. A reputable alcohol and drug rehab will fully disclose any risks involved in participating in their treatment programme. A good addiction treatment centre will utilise evidence-based therapies, which means the therapeutic approaches employed have undergone rigorous scientific research and have shown to be effective. Additionally, because everyone experiences addiction differently, the more individualised the treatment is, the better.  There should be a combination of both individual and group addiction counselling, and ideally an option for family therapy or dual-diagnosis therapy as well. When choosing a drug or alcohol rehab it is always best to consult a doctor or addiction specialist in order to help you determine what type of treatment is the safest and most effective for your individual case. And while spending a weekend in the forest taking psychedelics probably sounds more fun than weeks of counselling and therapy at an addiction treatment centre, it is important to remember that addiction is a serious disease and there is no quick-fix solution. Successful, long-term addiction recovery requires persistence, dedication and a willingness to succeed.