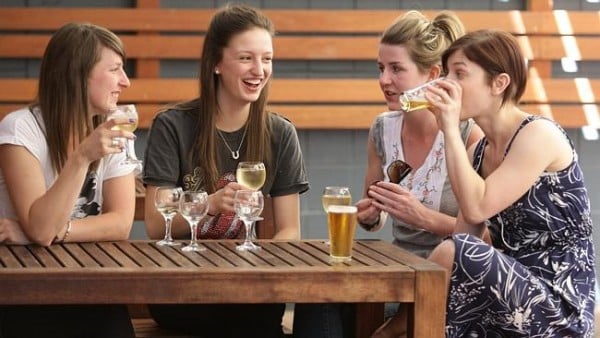 Part of the problem, according to the experts, is that many drinkers do not know what constitutes a standard drink. Since they can get four (very full) glasses of wine from a single bottle, they assume that a bottle of wine has four servings. In fact, a typical bottle of wine is actually 7 to 8 standard servings of alcohol.

Australian women are increasingly at risk for a range of harmful drinking behaviours and this is a worrying trend, as reported in a recent feature in the Herald Sun News.

A prominent Australian research body, the Foundation for Alcohol Research and Education, says that almost one third of the women in the country are at risk due to dangerous drinking. In their research, dangerous drinking is understood as more than 4 standard drinks per sitting. Part of the problem, according to the experts, is that many drinkers do not know what constitutes a standard drink. Since they can get four (very full) glasses of wine from a single bottle, they assume that a bottle of wine has four servings. In fact, a typical bottle of wine is actually 7 to 8 standard servings of alcohol. In addition, marketing efforts often portray drinking as a harmless way to relax. This is particularly true of wine; so many women drink it excessively. Many do so under the impression that because it comes from grapes it is less harmful than other forms of alcohol, such as whiskey or vodka. Unfortunately, when consumed to excess, any form of alcohol can have harmful effects. One of the most unfortunate negative outcomes of drinking for women is domestic violence. In Australia, one report found that there are 24,000 victims of alcohol-related domestic violence each year. In addition, there is also increased risk of accident, including falling and drunk driving. Other health dangers include elevated risk of breast cancer. Some research suggests that alcohol contributes to one in five cases of breast cancer in Australia. Women who consistently drink large amounts of alcohol also face greater risk for other health conditions, including damage to the liver.

So what is causing this drinking trend? In addition to social factors such as marketing, drinking has become a common coping strategy for women to deal with stress. As more and more women have entered the workforce, they have encountered workplace pressure and have resorted to drinking alcohol to relax.

Some recent memoirs and articles written by women with careers illustrate this trend. Gaynor Adler, a popular blogger, says that what started as a single glass of wine after work soon became a whole bottle of wine in a single sitting. Canadian journalist Ann Dowsett Johnston wrote in her memoir Drink of how her love of wine eventually caused her to lose her job, damaged her relationships, and drained her passion for life. At The Cabin Chiang Mai, we offer world-class treatment for alcohol and other addictions. If you are seeking treatment for addiction, we encourage you to contact one of our counsellors today.