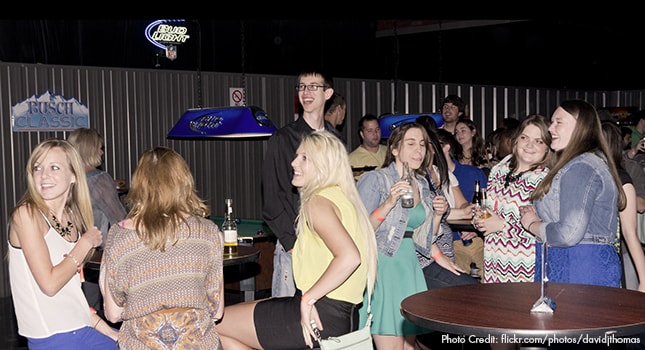 College students are sometimes most at risk for binge drinking, due to some of the alcohol games they play. These games are played to have fun and to get intoxicated, but what actually happens is the users normally consume large amounts of alcohol over the period of one night or for many days straight.

Due to easy availability, it is the most commonly abused substance amongst students. Since it is affordable and legal in most countries, most students use alcohol at least once a week. Since many students will play drinking games that encourage binge drinking, they will suffer many of the side effects that alcohol has.

Binge drinking is the cause behind thousands of students every year getting injured and having to go to the hospital emergency room. Every year one of the top causes of deaths amongst college students is because the student was playing some sort of game that had alcohol involved. Many of these could have been avoided if the student had not participated or not been with someone who had participated in these games that encourage binge drinking.

Many colleges have fraternities and sororities that make the students pledge and go through hazing to become a member, sometimes they will have to consume large amounts of alcohol during some of the games or competitions that are played. Many students will do anything to get into a fraternity or sorority including drinking large amounts of alcohol, and this has lead to many deaths on campuses.

Many female students each year are sexually assaulted or raped at college parties where binge drinking is taking place, or after excessive drinking at a bar or club. Some of the females that were raped reported that they became unconscious after binge drinking alcohol, and some reported that they were raped after they played games that involved consuming alcohol; these games were part of the hazing practices they had to complete in order to get into their sorority.

Some female students who are sexually assaulted, but not raped, reported that they were not part of the alcohol games themselves, but the person that had participated in the game was the assaulter. The colleges that normally practice hazing with alcohol games normally have the highest reports of sexual assault and rape.

Some of the games that encourage binge drinking are played in order to get intoxicated the fastest. Most of the time it is to see which student can handle the most alcohol in the shortest amount of time. Some of these games involve drinking ten shots in one hour, and others involve drinking beer after beer until one person is remaining drinking.

Some alcohol games played involve the student staying up for many hours and sometimes days at a time drinking alcohol. Some games will involve the student drinking only alcohol over a period of a weekend or a certain amount of days. This type of binge drinking has caused many students to end up in the emergency room and some have died.

When the student has a dependence to alcohol the next step is an addiction. Many college students each year become addicted to alcohol and end up either doing poorly in school or failing all together. If the addiction is not taken care of they will most likely continue to drink and follow the path of many alcoholics before them.

Get Help and Remain Sober

Having fun and playing alcohol games can be the first step on the path to an addiction for any college student. The next step is get help to quit and remain sober so that you can graduate and enjoy life. If you are addicted to alcohol and are ready to quit and take control of your life, contact The Cabin Chiang Mai today.