A New Connection Found Between Energy Drinks and Alcohol 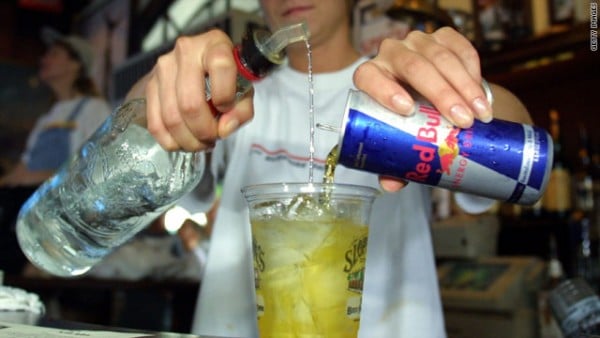 A new twist has been revealed about possible triggers for alcohol abuse. Those shiny bottles of energy drinks widely found for sale in convenience stores are now linked to increased drinking, and also to increased intoxication.

While experts agree about the genetic basis for alcoholism, researchers are still uncovering environmental triggers linked to drinking behaviors. It’s commonly understood that factors such as peer group, as well as availability of alcohol, are linked to increased alcohol consumption. But as a new trend of consuming energy drinks together with booze has grown popular, researchers have recently focused their attention on this developing problem.

According to a major study conducted at the University of Pennsylvania, energy drinks containing caffeine are related to greater alcohol consumption among college students. As reported on thefix.com, the research found that consumption of the popular beverages related to an increased risk for a number of alcohol-related behaviors.

The study, published in the Journal of Adolescent Health, was conducted with 744 university students. Participants in the study who regularly consumed energy drinks also consumed greater amounts of alcohol. In addition, during a given day, when students drank an energy drink, they were also more likely to drink alcohol.

In addition to increased alcohol consumption, the study also found that energy drinks had another negative consequence: students reported feeling less drunk, and thus tended to drink more. As a result, they were at higher risk for both the immediate health dangers of binge drinking and the long-term, chronic effects of continued alcohol abuse.

At present, researchers have not identified the causative mechanism of the increased use of caffeine-containing drinks together with alcohol. One hypothesis is that young people who already engage in risky behaviors may be attracted to drinking in this way. Even so, it is clear that with the wide availability of energy drinks, there is a greater likelihood that those who already drink will likely drink with increased frequency.

Recovery from alcoholism can be complex. While alcoholism is a genetically heritable disease, it is also true that factors in the environment influence behavior. At The Cabin, we believe that abstaining from alcohol is the most effective treatment for addiction, and no matter what one’s immediate environment is it is possible to maintain this abstinence if one is equipped with the proper coping tools. For those without an alcohol addiction, a cocktail mixed with an energy drink can be a welcome way to unwind. If you do choose to drink, we encourage you to do so responsibly.

Different types of Alcohol Rehab Programmes: What Type do you Need?